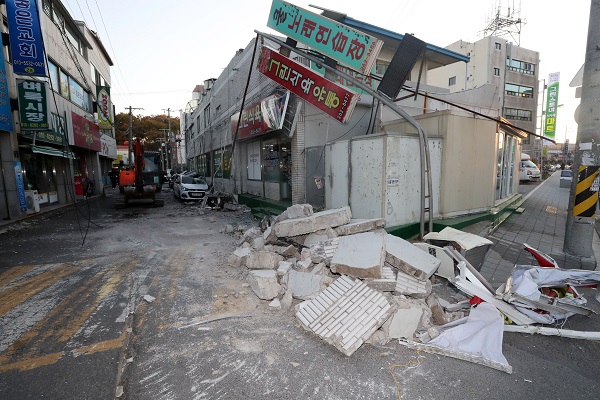 A magnitude 5.4 earthquake struck the southeastern city of Pohang on Wednesday, damaging buildings, breaking windows and sending tremors to as far as Seoul hundreds of kilometers away. At least seven people sustained light injuries, officials said.

The quake occurred at around 2:29 p.m. some 9 kilometers north of Pohang and a series of aftershocks followed, the Korea Meteorological Administration said. It marked the second-strongest quake ever to hit South Korea after last year's magnitude 5.8 earthquake in the nearby city of Gyeongju.

President Moon Jae-in ordered the convening of a meeting to discuss the situation upon returning from a trip to Southeast Asia. Prime Minister Lee Nak-yon also ordered the interior minister to do everything to help victims.

The quake was felt across the nation, including Seoul about 374 km away from Pohang, as well as the island of Jeju, sparking a flood of reports of buildings shaking, books falling from shelves and frames falling off walls.

The region is also home to nuclear power plants, but the reactors are working normally, officials said. The nuclear waste disposal facility in Gyeongju and steelmaker POSCO's plant in Pohang are also showing normal operations, they said.
But the quake caused damage to a series of buildings in Pohang.

Some buildings, including one at Handong Global University, saw part of their outer walls come off and fall to the ground, damaging cars parked below. Some other buildings developed cracks. Many windows were also seen broken in the wake of the quake.

Seven people sustained light injuries associated with the quake, according to the National Fire Agency, but no further details were available. Firefighters also rescued dozens of people, including some of them stranded in elevators, the agency said.

The quake also caused disruptions in Internet and other communication services in the region.

About 100 residents of an apartment complex near the epicenter fled their homes to safer areas after the quake hit. Some were wearing only short-sleeve shirts as they hurried out on the coldest day yet this fall.

"Frames hanging on a wall fell to the floor and books fell from shelves," a 40-year resident of the apartment complex said. "All this happened in an instant and I was surprised."

Students at a nearby elementary school were seen evacuating classrooms.
Nearly 6,000 phone calls flooded regional fire stations across the nation, with people reporting that their homes shook and many of them asking if it was indeed an earthquake.

"I, along with my daughter, raced down the stairs as the doors and windows of my house on the fourth floor rattled for minutes," Cho Mi-yeon, a 64-year-old resident in Changwon, said. "Some 20 minutes later, I returned home and then packed some clothes to bring out with me in case of aftershocks."