G-Star gets off to a robust start with 676 firms

G-Star gets off to a robust start with 676 firms 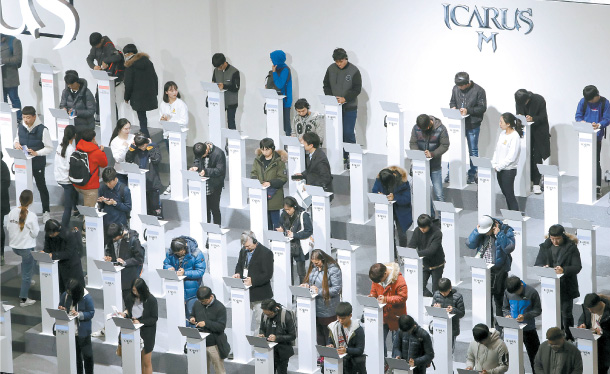 Game fans are immersed in Icarus-M, a mobile MMORPG game, which was introduced at the G-Star gaming event at Bexco in Busan Thursday. This year, 676 companies from 35 countries are participating in Korea’s largest gaming exhibition. [YONHAP]

BUSAN - This year’s G-Star, an annual gaming exhibition, kicked off with much hoopla and people lined up well before the official opening despite near-freezing weather in Busan.

Despite concerns that the exhibition has lost some ground in the gaming industry, this year’s conference welcomed 676 companies from 35 countries, a record high for the event.

Among the exhibition booths at the event, those of Bluehole Studio, Nexon and Netmarble drew the largest crowds on the first day.

Bluehole Studio and Kakao Games, Bluehole’s local publishing partner, hosted the Kakao Games Battlegrounds Asia Invitational at this year’s G-Star. They invited players from across Asia to play PlayerUnknown’s Battlegrounds, which won six different awards including Game of the Year at the 2017 Korea Game Awards held by the Korea Association of Game Industry. The association is also the organizer of G-Star.

Nexon, whose booth took up the entire right wing of the exhibition hall, drew crowds interested in FIFA Online 4, a reboot of the popular online football game developed by Electronic Arts, an American game giant.

Local gamers and fans also flocked to Netmarble’s booth. Many were trying out upcoming titles such as Icarus M and Tera M. The beta version of Icarus M, for instance, allowed visitors to get a glimpse of what the game will offer when it is officially launched, such as flying mode and in-game battles.

Despite the attendance of major Korean publishers, the exhibition has been criticized for losing relevance as a global gaming conference. The criticism was triggered after big names like Blizzard and Sony pulled out of the event. Still, the Korean market is a major market for game makers across the globe and still seems to be attractive enough to bring a number of companies outside of Korea to exhibit in Busan.

Rikor, a computer hardware and software developer based in Russia, was among them. The company came to G-Star hoping to find a local publisher to introduce its game to Korean gamers.

“We are a company that develops hardware such as drones and computer hardware,” said Margaryan George, the creative producer at the Russian company. “What we brought with us is the first project that our gaming division, launched four years ago, has developed.”

The game is called CityBattle. Players from Busan form a team and fight against teams from other cities such as Beijing. The game will be launched early next year through the Steam online game platform.

“Obviously Korea is a big market with top players in many e-sports, so we came to G-Star to find a local publisher,” said the creative producer.

Bandai Namco Entertainment, a publisher from Japan, was also present at the exhibition.

“While Japanese are interested in playing games based on specific intellectual properties [such as comics popular in Japan], Koreans are more about actually enjoying the games themselves,” said Kim Bo-min who works in the overseas marketing team of the Japanese publisher. “The response we received from the local gamers after last year’s G-Star was quite welcoming, which is why we decided to come back this year.”

Twitch TV, a subsidiary of American e-commerce giant Amazon and a video platform specializing in live streaming video games, has been participating in G-Star as a main media sponsor, streaming various aspects of the exhibition live on its channels. Jennifer Jessup, the event director of Twitch, told the Korea JoongAng Daily that the company considers Korea an important market in the global gaming industry, which is why it has been extending its partnership with the organizer of the exhibition.

“The Korean market is an attractive market for Twitch with global-level players and an enthusiastic community of fans,” said Twitch’s event director Jennifer Jessup. “We are quite pleased by the fact that Twitch can be the media sponsor of G-Star for three straight years and Twitch hopes for more opportunities in the future, where we can meet the Korean fans and publishers.”