The online battle to secure a ticket : K-pop fans, known to sell out concerts in seconds, are accused of interfering with other events

The online battle to secure a ticket : K-pop fans, known to sell out concerts in seconds, are accused of interfering with other events 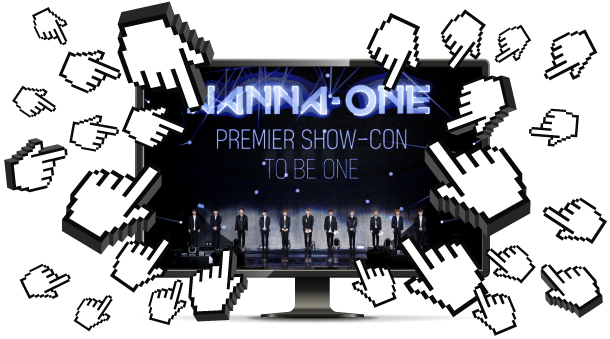 Koreans are notorious for being fast at everything, but just how fast can they get? When it comes to clicking their way through a ticketing war on the internet, it is usually milliseconds that divide the winners and the loser.

Whenever a big-name pop star holds a concert, it’s a given fact that all tickets will sell out. What matters most is how long it takes for the tickets to sell out.

For most mainstream pop acts, it’s common for fans to empty the online shelves within minutes, if not seconds, after sales begin. For instance, when boy band Exo held its first solo concert on May 24 and 25, 2014, it took exactly 1.47 seconds until all 15,000 tickets were sold out.

According to most fans, this split-second sell-out is one of the most “peaceful” situations for a ticketing battle. It’s common for websites to shut down due to high traffic, taking minutes, if not hours, to proceed to the next page. In February 2015, a hacking attack on the ticketing website for a BTS concert forced the site to shut down sales for hours before it returned to normal.

“It usually takes about two hours to get a ticket,” said a fan of boy band Wanna One, who recently secured a ticket for one of the group’s upcoming concerts. “Because there are so many people connected to the same server at once, it’s common for a site to shut down for minutes, if not hours. So it’s not just about being fast - you have to be patient as well.”

The ticketing process begins with going to the nearest internet cafe, where connection speeds are much faster and more reliable than at home or in the office, half an hour before ticketing begins. The key to winning a seat at a concert is up to “gwangcl,” a Korean portmanteau famous among the internet-savvy youngsters, which means to click at the speed of light.

Once seated, fans download a digital clock, which does not run according to the computer’s default system, but instead follows the ticketing site’s system and tracks time according to the website - all diehard fans know that every website runs on slightly different time, and even though the small differences don’t matter much in everyday life, it means everything in a ticketing war.

Click too early, and you get a pop-up saying that it’s not service time yet, which you must click to remove; sometimes in the time it takes to exit the pop-up, the server shuts down and you’ve missed your chance. And if you click mere seconds too late, then all the seats will be gone. It’s important to click at the right moment - just a second before the server opens. 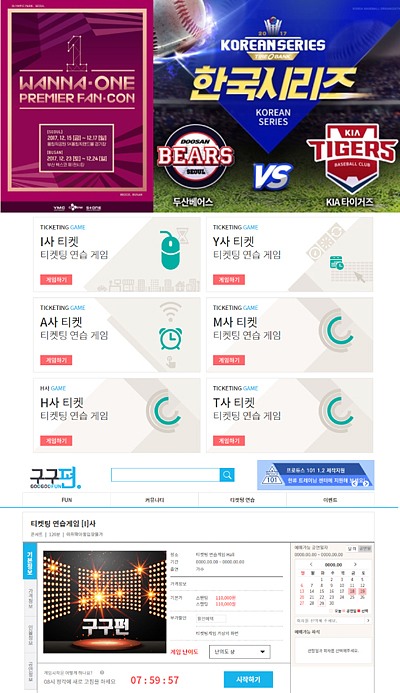 From the top: Ticket sales for the Korean Series between the Kia Tigers and the Doosan Bears and boy band Wanna One’s concert were only one day apart. Website Googoofun is the home of a ticketing practice game. The game replicates the interface of popular ticketing websites for people to practice their speed when securing tickets. [INTERNET CAPTURE]

Some people even resort to buying programs commonly referred to as “macro,” to do the clicking for them. These programs can perform thousands of clicks in a single second. “Some people buy the program, but not many, because it’s no use if the server shuts down,” said the fan.

To allow eager fans a place to practice, the website Googoofun set up a ticketing rehearsal game in 2014. On the website, users can have a go at trying out the systems on six different local ticketing websites. Users can even choose the level of difficulty on the game to train themselves.

However, concert tickets aren’t the only things that are sold on the internet, and so the gwangcl battle takes place in various places wherever there are a limited number of commodities up for grabs online, including: holiday tickets for KTX trains, online class registration at university, sports game tickets, seats for seminars, online sales of limited edition fashion items and so on.

Among the many reasons for people to sit down for a ferocious clicking battle, nevertheless, the most heated are undoubtedly the idol concert tickets. Knowing full well of such enthusiasm of the fans, people take advantage of the situation through various ways.

Besides predictable issues that arise due to ticket scalpers, music fans are often blamed by others as the cause of ticketing wars for different events. Often, when pop concert’s tickets go on sale around the same date as other events, it’s common to see rumors that music fans took part in trying to get tickets for different events for practice.

On Oct. 23, the tickets for the third, fourth and fifth games in the Korean Series games between the Kia Tigers and the Doosan Bears went on sale. Baseball fans reported unprecedented competition after the ticketing website temporarily shut down due to high traffic, and many couldn’t even log on. Their anger heightened, after a baseball fan posted to a popular forum that they had “caught a scalper, who admitted that she had taken part in purchasing tickets because she wanted to practice before the Wanna One concert.” The Wanna One December concert tickets went on sale the very next day.

However, the accusation on the baseball forum turned out to be fabricated. Similar rumors have sprung up on other occasions as well, but no one has been able to provide solid evidence to support their claims.

“Sometimes, I feel like people just blame us for everything without looking into what really happened,” said the Wanna One fan.