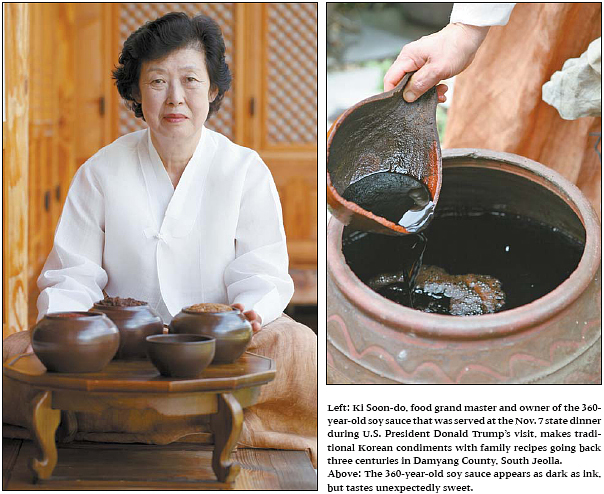 The 360-year-old soy sauce featured at the Blue House state dinner during U.S. President Donald Trump’s visit to Korea on Nov. 7 garnered international attention, as some noted that would make it older than the United States itself.

“I hesitated, but decided to give a bit of the sauce because I wanted to take this opportunity to show the president of the United States how authentic Korean food tastes, and put it in the international limelight,” said Ki Soon-do, the 69-year-old food grand master whose family owns the sauce. Ki has been making traditional condiments for the past 46 years, using family recipes that go back as far as three centuries.

Ki married into a traditional jang family, and learned the generations-old recipes from her in-laws. Jang, meaning paste or sauce, is used to refer to certain Korean condiments such as fermented soybean paste, fermented red pepper paste and soy sauce.

Behind her home in Changpyeong, a township in Damyang County, South Jeolla, lies a field of 1,200 earthenware pots filled with fermented condiments, including soy sauce.

Ki explained that with the exception of special family events, the vintage soy sauce is rarely used. “It is one of our most prized possessions as we only have two-thirds of it left in the pot,” said Ki, “so it was a big decision to give it [for the state dinner], and we felt so sorry we could not provide a copious amount.”

Ki was named food grand master No. 35 in 2008 by the Korean Food Grand Master organization, which evaluates the contribution specialists make to traditional Korean food. She was honored after the release of her jinjang, or soy sauce that has been aged for more than five years, and in 2015, her Ki Soon Do Traditional Soy Sauce was awarded the K-Ribbon as an excellent cultural product in the Korean Food category by the Korea Craft and Design Foundation.

Damyang County is a popular tourist destination for its bamboo parks, gardens and products. Ki’s vintage soy sauce recipe includes melting bamboo salt in water from a well near her home. Ki said that the taste of the saltwater combined with the sweetness from the bamboo gives the sauce its distinctive umami character.

Ki also makes other products such as fermented soybean paste and red pepper paste, which are now used by famous chefs around the world.

Eric Ripert, head chef of a Michelin 3-star French restaurant in New York, and Rene Redzepi, head chef at and co-owner of Copenhagen’s Noma, which was voted best restaurant in the world by Restaurant magazine four times, have both been said to adore Ki’s soybean paste.

“Foreign chefs are highly interested in the creation of fermented soybean paste,” said Ki, “because they are intrigued by how we can make this kind of taste using only beans, water and salt.”

But she expressed her disappointment that the tradition of making fermented condiments is disappearing in Korea and that many Koreans now think the only soy sauce available is one for soups.

“I hope through the recent event [the Blue House state dinner],” said Ki, “that awareness of the taste and quality of authentic traditional Korean food spreads even further.”