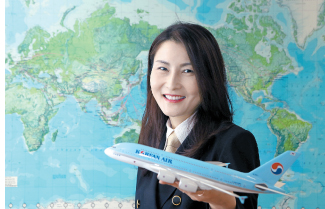 Just a few years ago, Hwang Yeong-jung, a female captain at Korean Air, made headlines for being Korea’s third female captain and the nation’s first married couple involving two captains.

The 44-year-old Hwang, who has 21 years of experience as a pilot, recently added another achievement to the list by becoming the first female Korean captain to helm the A380 plane, the world’s largest passenger airliner. Often dubbed the flying hotel, Korean Air owns 10 A380s, while Asiana Airlines operates six.

There are 208 pilots in Korea who have been approved to operate the A380. Hwang is the only woman.

Hwang became a captain in 2008 after working as a co-pilot for 10 years. In 2013, she began training for the A380 and was approved the following year. Last year, she surpassed 10,000 total flight hours, and this year, she set a record by having 5,000 accident-free hours.

Hwang says her dream was to become a stewardess when she was in college, but she changed her mind once she saw the inside of a plane.

“It instantly made my heart beat and I decided this was where I wanted to be,” Hwang said in a recent interview with the JoongAng Ilbo. “When I became a pilot trainee, I encountered a captain who said to me that he knew I would become a pilot.”

What follows is an edited excerpt of the interview.

Q. Was it hard to be a female in a male-dominated profession?

A. In the cockpit, there is no discrimination against women assigned to the captain and co-pilot. There are things that men do better and things that women do better than men. Women are more sensitive and react more quickly to changing situations.

Do you recall any incident where you experienced difficulties because you were a woman?

When I was a trainee, a bird crashed into the front of the airplane and its blood splattered all over the window. I screamed, but the captain told me to not show my surprise even in an emergency situation because I need to reassure passengers of their safety. I still remember that advice.

Can you give advice to young women who want to be captains in the future?

When I first got my job as a pilot, Cho Joong-hoon, former chairman at Korean Air, said, “don’t give up your life as a pilot, as a mother and as a wife.” That really inspired me.