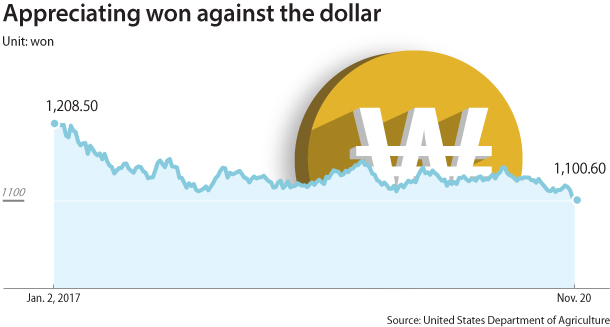 While the economic outlook has been improving and the stock market has enjoyed a bullish rally, the Korean economy faces new challenges; the strengthening Korean won against the U.S. dollar and the continuous rise of crude oil prices.

As of Monday the Korean won depreciated to close at 1,100.6 won against the greenback after gaining 3.1 won from Friday. Although the won has now risen back above the 1,100 won, when it closed below that level for the first time in 14 months on Friday, alarm bells began to go off.

Market experts project that the won will likely continue to strengthen until the end of the year.

Hana Financial Investment projected that the current momentum will likely continue, with the won traded between 1,070 and 1,120 won until the end of the year.

In fact, the won’s appreciation last week was alarming due to its speed -19.6 won in a week.

One of the main reasons behind the won’s appreciation is Korea’s continuously growing exports.

Last month, Korea’s exports, despite the 10-day long Chuseok holidays, grew 7.1 percent compared to a year ago to $44.9 billion, adding to a continuous upswing for 12 consecutive months.

The government announced that as of Friday, the accumulated exports this year have already reached beyond $500 billion, tying the record for the earliest the milestone has ever been reached. Computer chips, which accounted for 21 percent of exports last month, are credited as the driving force.

“Thanks to the bullish market in the IT industry, Korea’s exports have expanded,” said So Jae-yong, a Hana Financial Investment economist.

The bullish rally on both the Kospi and the secondary Kosdaq has also driven the won to appreciate.

So far this year both markets have risen 20 percent compared to the beginning of this year.

Foreign investors have been racking up stock holdings in both the Kospi and Kosdaq.

“The appreciation of the won will come as a burden on the Korean economy as it will affect price competitiveness and this will worsen the performances of Korean exporters,” said Lee Sang-jae, an analyst at Eugene Investment and Securities.

According to the study by the Korea Institute for Industrial Economics and Trade, when the won appreciates 1 percent against the greenback, the operating profit ratio of Korean manufacturers falls 0.05 percentage points.

The won appreciation isn’t the only element that is likely to have a negative impact as rising crude prices are also starting to weigh down the Korean economy.

Gasoline prices have risen 8.3 won to 1,520.3 won per liter on average last week. Oil prices have been rising for 16 consecutive weeks.

Dubai crude is currently traded at $60 per barrel, which is the highest in nearly two and a half years. The last time Dubai crude was sold at that level was in July 2015.

A rise in crude prices increases the burden on Korean companies.

There is speculation in the market that crude prices could further rise to $70 or $80 per barrel next year.