SKT takes disaster relief to the hills of Gangwon

SKT takes disaster relief to the hills of Gangwon 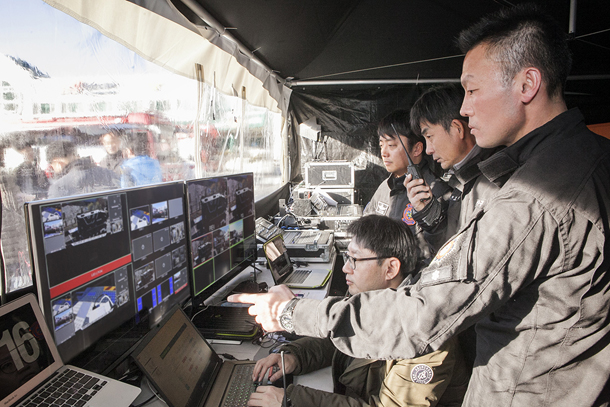 After an emergency was reported Monday morning to the Gangwon Fire Headquarters, a special mountain rescue team and two patrol drones - one with a thermal video camera and one with an optical zoom camera - were dispatched immediately.

In less than five minutes, the patrol drones spotted the injured victim. Human rescuers moved directly to the accident scene via helicopter. The whole rescue process was streamed live to the fire headquarters from the cameras on the drones, an action camera inside the helicopter and body cameras worn by the rescuers.

As the victim was safely moved onto the helicopter, rescuers held a direct video chat with a medical team on the ground, allowing the responders to give appropriate first aid care while the medical team was able to prepare for the helicopter’s arrival based on what they had seen on the video.

The display on Monday was a demonstration of SK Telecom’s public safety solutions and Gangwon Fire Headquarters’ expertise in rescue missions. The two inked a partnership on Monday to enhance public safety by using high-tech cameras and live-video transmitting technology via the mobile carrier’s internet networks.

“As the efficacy of our rescue relies heavily on the time spent finding the victim, I think such a system will greatly influence our rescue missions,” said Lee Sang-ho, a fire fighter from the Gangwon headquarters.

SK Telecom is giving 500 million won ($455,540) worth of gadgets, including 230 rugged phones embedded with body cameras, four patrol drones and a T Live Caster video-encoder to the fire headquarters, as well as one-year of free access to its network under the new deal. The Gangwon headquarters is distributing the devices to 16 of the fire stations it manages, which includes the Pyeongchang fire station.

A T Live Caster compresses captured videos and send them via the internet to broadcasting devices. Patrol drones made by DJI are fitted with infrared imaging cameras and cameras with a 30X optical zoom and are designed to be water and dust-proof. Rugged phones from Kyocera meet military testing standards for protection against shock, water, dust, extreme temperatures and vibration.

These devices can withstand temperatures between minus 20 degrees and 60 degrees Celsius, according to Korea’s largest mobile carrier. Meeting these standards was crucial for safe implementation in disaster situations.

Gangwon was chosen as it is one of the largest provinces in Korea and is a highly mountainous region, making it difficult for firefighters to cover the area. According to the Gangwon fire headquarters, the area has a higher concentration of special rescue missions than any other region in the country. It is also the province where the 2018 PyeongChang Olympic Games will be held.

“When next generation high-speed 5G internet is enabled, we may be able to develop even more advanced gadgets like 5G-connected fire helmets, fire robots and sensor-attached fire suits,” said Eddie Ra, leader of the Internet of Things business strategy team at SK Telecom.