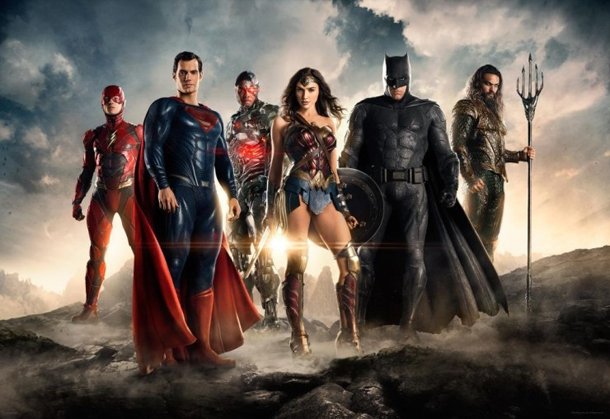 Warner Bros. and DC’s big superhero mash-up “Justice League” arrived at the top of the box office in both Korea and North America. [WARNER BROS. KOREA]

Warner Bros. and DC’s “Justice League” landed at the top of the box office at both Korean and North American theaters over the weekend.

The superhero film opened with 7.04 billion won ($6.3 million) in its debut weekend at the domestic box office, but it recorded a disappointing $96 million during its opening weekend in North America.

The big budget superhero mash-up, featuring Batman, Wonder Woman, Aquaman, Cyborg and the Flash, sold 822,000 tickets at 1,308 screens from Friday to Sunday, bringing its total since its release last Wednesday to 1.14 million tickets. It accounted for 47.9 percent of the weekend’s entire ticket sales, far above second-place “Happy Death Day,” which marked 16.4 percent of tickets sales through 292,000 admissions.

In North America, “Justice League” came in well under expectations, which had pegged it for a $110 million launch in North American theaters. If studio estimates hold, it will also have the dubious distinction of being the lowest-opening film in the DC Extended Universe.

It has been a rollercoaster for the DC Universe since “Man of Steel” kicked off the comic book franchise in 2013, with films battling high expectations, critical reviews and the impossible standard of competing against the Marvel Cinematic Universe. “Batman v Superman: Dawn of Justice” may have been a critical dud in early 2016, but it still opened to $166 million and went on to net $873.3 million worldwide by the end of its run.

“Justice League” comes on the heels of the widely well-received “Wonder Woman,” the first DC Extended Universe film to score with both critics and audiences. It reunites Ben Affleck’s Batman and Gal Gadot’s Wonder Woman to fight a new threat facing earth while introducing new characters like Ezra Miller’s The Flash, Jason Momoa’s Aquaman and Ray Fisher’s Cyborg. “Justice League” didn’t impress critics, but neither did “Batman v Superman” or “Suicide Squad,” which still managed to earn $133.7 million out of the gates.

Warner Bros. is remaining optimistic about “Justice League’s” prospects, even with the lower than expected launch against a production budget that’s reported to be in the $250 million to $300 million range, which doesn’t include marketing expenses.

“I did have a higher expectation for the three days,” said Jeff Goldstein, who heads up domestic distribution for Warner Bros. “[But] this is a big vacation week, and we have an opportunity to get a big audience to see us in a different pattern.”

Goldstein said he is also encouraged by a few factors, including the overall B+ CinemaScore, the fact that women, who accounted for 42 percent of the audience, gave it an A- overall, and that Saturday earnings were up from Friday’s.

“Clearly there is interest in the movie,” Goldstein said. “Justice League” pulled most of its weight abroad, where it launched to $185.5 million from 65 markets, boosting the worldwide debut to $281.5 million.

One film that did have a heroic showing this weekend in North America is “Wonder,” an adaptation of R.J. Palacio’s novel about a child with a facial deformity that stars Julia Roberts, Owen Wilson and Jacob Tremblay.

The family-friendly drama opened in second place with $27.1 million against a $20 million production budget and could be on its way to becoming a sleeper hit. Lionsgate distributed the film, which was financed and produced by Participant Media.

“Any time you have a big superhero movie opening, a movie like ‘Wonder’ could be overshadowed. But it’s one of the brightest spots of the weekend,’’ said Paul Dergarabedian, a senior media analyst for comScore. “This could be a $100 million movie as people get the word out.”

In domestic box office, horror flick “Happy Death Day” managed to stay at the second spot, above Disney and Marvel’s “Thor: Ragnarok,” which has now sold a total of 4.6 million.