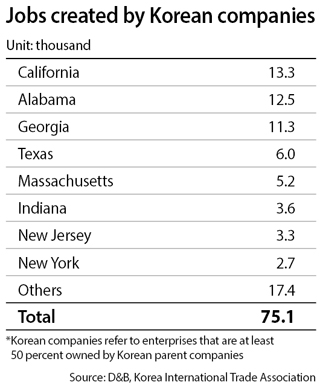 Korean companies have created roughly 40,000 jobs in the United States since a bilateral free trade agreement between Korea and the U.S. went into force, the Korea International Trade Association (KITA) reported Tuesday.

The report is intended to counter claims that the trade pact was a job-killer in the U.S.

The trade group analyzed data from American research consultant Dun & Bradstreet and found roughly 75,000 people in the United States were hired by 1,716 corporations and overseas branch offices either wholly-owned or majority owned by Korean companies as of August.

The United States has used data from the U.S. Bureau of Economic Analysis (BEA) released in August to measure Korean firms’ contribution to U.S. jobs. Based on the BEA’s latest paper, Korean companies have hired 52,000 people as of 2015.

KITA claimed since the BEA data is based on the 2015 fiscal year and included only companies exceeding $40 million in assets, revenue and profit, smaller Korean companies or branch offices were left out.

August data from D&B, according to KITA, is more practical since it is constantly updated and includes all companies at least 50 percent owned by Korean enterprises regardless of the size of their businesses.

Still, both sets of data show that hiring by Korean companies has increased in the U.S. compared to before the free trade agreement came into effect in 2012. According to a BEA figure in 2011, hiring by Korean firms stood at 35,000.

Jobs created in the U.S. used to be focused in the manufacturing sector but more jobs are now being created in high value added sectors such as computer programming, engineering and telecommunications, KITA said.

Among examples of Korean firms investing in the U.S. is local auto parts maker Sewon Precision Industry, which registered an American corporation, Sewon America, to produce auto parts in the state of Georgia in 2008. It has since invested $300 million in the company, which is based in LaGrange, Georgia, 18 kilometers (11 miles) away from a Kia Motors factory. As the corporation’s revenue increased from 21.2 billion won in 2009 to over 400 billion won last year, its workforce increased from 360 in 2009 to 750.

“Some argue the FTA has cut jobs in the U.S. but it’s the opposite,” said Cho Seong-dae, deputy general manager of Americas department at KITA.

This year, Samsung Electronics and LG Electronics have announced new factories in the U.S.