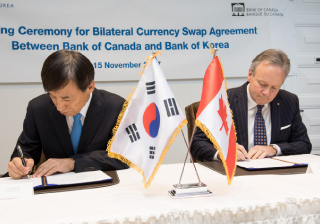 In late September, during the North Korean nuclear crisis and China’s Thaad retaliation, I asked an official at the foreign exchange authority about the future of the Korea-China currency swap, and he sighed before answering. The agreement was about to expire, but China didn’t confirm the extension. A currency swap is a contract that prearranges currency exchanges when needed, an important safety net in the event of a foreign currency crisis.

He said that the agreement was affected by politics and the outcome was uncertain. When I asked whether the government was pursuing a currency swap with the United States as an alternative, he responded ambiguously. He asked whether reaching an agreement with the United States would be easy, but added that various options should be sought. Last month, a currency swap was extended after some difficulty. It was great news, but it made me feel bitter that the extension was cautiously announced without an official ceremony.

A month later on November 16, the news of a new currency swap agreement between the Bank of Korea and the Bank of Canada came out. It threw me off guard. It occurred to me why the official responded so vaguely.

It was back in March that contact with Canada began, just as China’s retaliation became intense. The foreign currency authorities were looking for an alternative option, but Japan was uncomfortable, and the United States was too overbearing. So the “detour” to Canada was devised. There are no complicated diplomatic issues with Canada that can hinder the agreement. Also, Canada already has an unlimited currency swap with the United States. So, Korea could effectively enter the “dollar umbrella” of the United States indirectly through Canada. The market responded immediately. From the day of the announcement, the value of the Korean won went up, and the credit default swaps premium, which indicates the risk of Korea’s government bonds, fell.

The agreement itself is meaningful, but what’s more significant is that it proposed a “survival model” for the Korean economy. In the foggy, ever-changing environment, obvious moves don’t work anymore. Just as the foreign currency authorities’ example shows, we need to be more agile and imaginative to bring a breakthrough.

Minister for Trade Kim Hyun-chong used a similar strategy in trade negotiations. Over 10 years ago, when the Korea-U.S. FTA was pursued, he approached Canada first to attract the United States, which did not budge at first. Now, the second round is nearing, as negotiations for the revision of the Korea-U.S. FTA is about to start. And the negotiation strategy is “clamor in the East, attack in the West.” I hope to hear more surprising yet pleasant news like the currency swap deal with Canada.

*The author is a deputy business and industry news editor of JTBC.