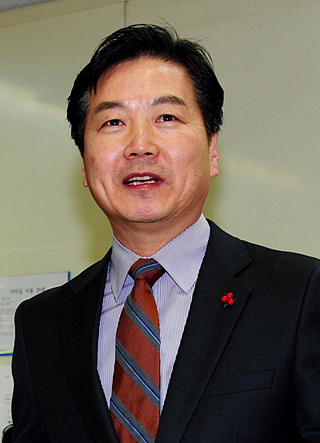 The recently appointed head of the Ministry of Small and Medium-sized Enterprises and Startups on Thursday vowed to keep conglomerates from stealing technology from small to medium sized companies, declaring it a top priority for the ministry created under the Moon Jae-in government.

“We will fix this problem of major companies stealing technology [from small to medium size companies] no matter what. Preventing such theft of technology is high on the Moon government’s agenda,” stressed Hong Jong-hak, who was appointed by the president two days earlier to lead the new ministry, during a meeting with reporters at the Korea Federation of Small and Medium Business in Yeouido, western Seoul.

It was the new minister’s first encounter with journalists since his appointment amid a controversy over his alleged ethical lapses, which led opposition lawmakers to object to him leading the ministry aimed at leveling the playing field for both large and small to medium size companies.

Reiterating the importance of stopping the long-held practice of big companies stealing technology from small businesses, the former ruling party lawmaker said setting up a system under which such technology developed by SMEs is protected by the ministry was one viable option.

“We will easily achieve that objective [of stopping the stealing practice] by having SMEs report their new technology to our ministry and making use of the Korea Technology and Information Promotion Agency,” said the new minister. He continued that in order for new venture firms to emerge, the long-held and overlooked practice of family-owned conglomerates must be stopped.

The former economics professor also made clear his support for shortening working hours, a policy move championed by the Moon government. “I have strong faith in reducing the working hours of Koreans. It is a path we must go down,” he said. “A society that has its members exhausted from work will not have productivity grow. [Reducing working hours] will be difficult in the short term. But in the long term, it will lead to increased productivity,” he continued. The ruling party and the government are pushing to reduce the maximum working hours to 52 from the current 68 hours a week.

Last year, Korea had the second longest average working hours of all 35 OECD nations after Mexico with 2,113 hours, which far exceeds the OECD’s average 1,766 hours.

The minister reiterated his earlier position that large retail stores such as Emart should be regulated in order to protect mom-and-pop stores.