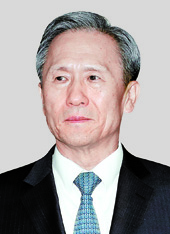 Former Minister of National Defense Kim Kwan-jin was released late Wednesday, just 11 days after his arrest over his alleged involvement in the military’s illegal manipulation of online public opinion against liberals during the Lee Myung-bak administration.

“The investigation will continue,” Kim said after being released at around 10:46 p.m. on Wednesday, “so I will faithfully comply with it.”

The Seoul Central District Court released Kim after examining a petition he submitted on Monday, asking the court to review the legality of his arrest and detention. Any person who is arrested or detained can petition the court to examine the legality of that arrest or detention pursuant to Article 213-2 of the Criminal Procedure Code, according to which the court will review relevant evidence and decide whether to release the individual within 48 hours of the petition’s filing.

“Minister Kim was the top person in the military’s command responsible for online activities,” said Kim Hyun, spokesman of the ruling Democratic Party, in a statement released on Thursday about the court’s decision that he would not likely destroy evidence.

He added that the decision to release Kim was “difficult to accept or understand,” asking the prosecution to conduct a thorough investigation, and “for there to be no wavering in the probe into former President Lee Myung-bak.”

Kim Kwan-jin previously admitted that he briefed former President Lee Myung-bak about the plan to expand the cyber command in July 2012, a move seen as intended to select agents supportive of the administration. But Kim claimed this was a legitimate cyber command operation.

The prosecution did not list Lee as a co-conspirator when it sought an arrest warrant for Kim.

The investigation is part of a larger probe into the National Intelligence Service and the military’s systemic intervention in domestic politics under the Lee administration.