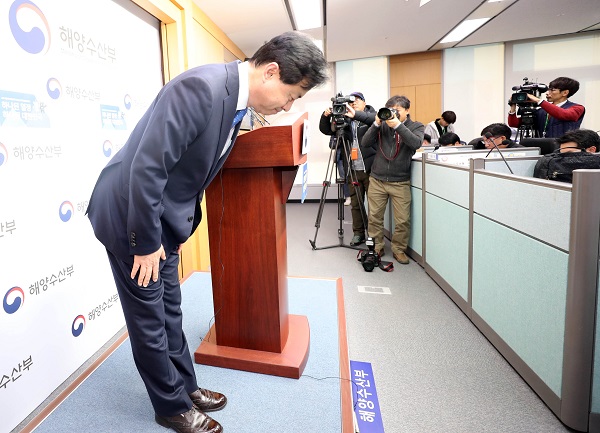 Oceans and Fisheries Minister Kim Young-choon makes an apology at a press briefing on Thursday, saying that he's ready to take responsibility after a ministry official was found to have attempted to conceal the finding of a piece of bone believed to be part of the remains of a victim of the 2014 ferry sinking. [YONHAP]

A government search team combing through the wreckage of the Sewol ferry discovered a piece of bone last Friday that appeared to be the remains of a victim, but decided not to inform the families of the five missing passengers, who held a joint funeral the next day to mark the end of their 1,312 day wait.

It wasn’t until last Tuesday that the team revealed the matter to a group representing the families of the victims of the Sewol ferry, which capsized off Korea’s southwestern waters on April 16, 2014, killing 304 people, mostly students. The bone was sent to forensics officials Wednesday, with results expected to come out two weeks later.

Now, the Moon Jae-in administration is being blamed for hiding the discovery for four days.
It is unknown whether anyone else in the Ministry of Oceans and Fisheries, with which the team is affiliated, knew of the bone. Ministry officials said the group had not reported the discovery to a Sewol investigative committee, which oversees the search mission.

The Oceans Ministry said the head of the Sewol search team testified he did not want to give “a faint hope” to the victims’ families without knowing with certainty whether the bone belonged to a missing passenger. The senior official was fired from the search mission and is now waiting to be questioned by ministry inspectors.

This was the only time in the seven months since the Sewol was hoisted from the sea and unloaded onto a dock at Mokpo New Port in South Jeolla that a discovery of remains was not announced the same day. On Wednesday, Moon ordered the ministry to thoroughly probe the cover-up and hold whoever was in charge accountable, adding that it was “impossible to understand” how the bone discovery was kept secret, according to Blue House spokesman Park Soo-hyun.

Prime Minister Lee Nak-yon apologized to the victims’ families on Thursday, while presiding over a meeting at the Government Seoul Complex, saying the case was “an indefensible disgrace” and that it proves the “irresponsibility” of Korea’s public workers.

Kwon Oh-bok, 62, whose younger brother and nephew are among the five passengers yet to be retrieved, told the JoongAng Ilbo in a telephone interview Thursday that he would have postponed the funeral had he known about the bone, adding he did not understand why the ministry withheld the information.

“I’m having mixed emotions,” said Park Jeong-sun, 47, whose son is still missing. “I can’t wrap my head around the ministry’s intentions.”
A spokesman for the victims’ families vowed to take legal action.