Institute for classics seeks more experts in its ranks

Institute for classics seeks more experts in its ranks 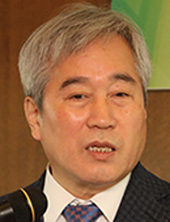 “In the face of globalization, there is an urgent need for the formation of a graduate school under the Institute for the Translation of Korean Classics,” said Shin Seung-woon, president of the institute, at a press conference held Monday for its upcoming 10th anniversary as a government-affiliated institution.

Funded by the Ministry of Education, ITKC is in charge of collecting, arranging, translating, compiling and popularizing books and other records that were written in Chinese characters or in Korean prior to 1909.

Though the specialized institute offers a seven-year classics translation program to create more professionals in the area, Shin explained that problems arise because the institution itself cannot offer an academic degree. In order for a student undergoing the program to receive a degree, they have to find a separate graduate school, while trying to juggle the program at the same time. “I want to shorten the length of the program and found a graduate school that grants both an academic degree and professional classical literature training to become an expert, and also helps students become accustomed to and familiar with the institute.”

“Experts who specialize in the translation of Korean classics are on average very old and as time goes by, we are seeing a shortage of young experts in their thirties,” said Shin.

The president informed the press that the institution still has 11,000 documents to translate and predicted it will take over 70 years to do so.

With its upcoming anniversary, the organization held an international classics symposium on Wednesday at the Korea Press Center in Jung District, central Seoul. Notable speakers included Kim Yong-ok, known by the pen name Do-ol, a Korean philosopher who spoke on the history of the institute, and Kim Moon-kyung, a professor from Kyoto University who presented on Chinese and Japanese classical literature.