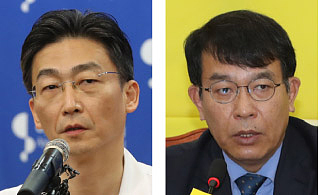 After criticizing Lee Cook-jong for infringing on the rights of his medical patient, the recently defected North Korean soldier, by telling the public that the soldier had parasites in his stomach, Justice Party Rep. Kim Jong-dae apologized publicly under mounting public criticism.

“I apologize if my words put pressure on the doctor when he should be focusing solely on treating the patient,” Kim said during a meeting of the party’s standing committee on Thursday.

On Nov. 17, Kim wrote in a Facebook post that the “exposure of the existence of parasites, excrement and even corn found in the stomach of the North Korean soldier was a terrorist attack on the human rights of the soldier… By exposing this, the Korean media has done the equivalent of what North Korea has done in shooting the soldier.”

The North Korean defector, identified as a 25-year-old army soldier surnamed Oh, is known to have sustained five wounds to his shoulder, abdomen and elbow, with one of the four bullets possibly creating two separate wounds. Some 40 rounds were fired at him on Nov. 13 by North Korean border guards, who pursued him as he crossed the Military Demarcation Line in the JSA.

Lee, who works at the Trauma and Acute Care Surgery Department in Ajou University Medical Center in Suwon, has been treating the soldier. In a press conference on Nov. 15, Lee said, “There is a risk of medical complications because the stomach was quite infected by excrement and parasites at the time of surgery.”

“I care a lot about the rights of the patients,” Lee said in a second press briefing. “I don’t try to create sensations out of the patients. I would rather quit my job than live like that.”

Lee also told JTBC in an interview that “all information to be shared at the initial press conference had been agreed upon with the government and authorities before it.”

Kim posted another message on Wednesday, this time addressed to Lee.

“You could have offered only an explanation on the patient’s state and how critical it is, but you spoke of previous conditions of the soldier like parasites which are not really related to his wounds,” Kim said. “You may have violated the Medical Act.”

Posts criticizing Kim, such as “Kim is bringing down the Justice Party,” or “I think Kim went too far in characterizing the act as a terror attack on the human rights of the soldier,” surfaced on the Justice Party’s website since then.

“Did Lee focus on saving the patient just to be politically criticized?” wrote the Korean Hospital Doctors Association, an association of some 7,000 doctors, on Wednesday. “He is doing all he can to save and treat the patient, and he should be encouraged to continue to do so.”

“Kim intended to criticize the press and the military initially,” she said. “We are sorry that we have put pressure on Dr. Lee who is giving all his best to save the patient.”