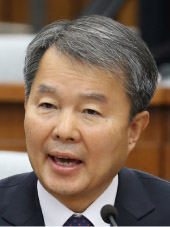 The National Assembly endorsed the confirmation motion for Lee Jin-sung more than two months after it voted down Moon’s first choice for the chief justice position amid disputes over the earlier nominee’s ideological orientation.

Of the 276 lawmakers present for the poll, 254 voted for him and 18 against, with one abstention and three invalid ballots.

The 61-year-old justice has been part of the court’s nine-member bench since September 2012. With no legal specification, a dispute lingers over whether Lee should begin a fresh six-year term as the court chief or serve in the post until his current six-year term ends next year.

Lee has said that his term as the chief may end next year unless there is a clear statutory definition.

During the hearing, Lee vowed to safeguard citizens’ constitutional rights, agreed with the labeling of North Korea as the “main enemy” and voiced thinly veiled support for those who reject mandatory military service based on their religious belief.

Addressing the abortion issue, he noted the need to “strike a balance between a fetus’ right and a pregnant woman’s right to self-determination.”