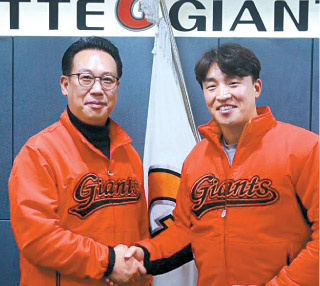 Son was asked for a status check from MLB clubs twice during the offseason, but decided to put aside his dream of playing in the major leagues to stay with his home club.

“From the beginning, we never thought of letting go of Son Ah-seop,” said the Giants. “We needed to respect the player’s desire [to explore his options]. Our contract was finalized pretty late, but it came down to the best result.”

The signing of Son is a source of relief for Giants fans who have been worried about the team after a string of big name losses. Hwang Jae-gyun, who played for the Giants from 2010 to 2016, spent last season playing for the San Francisco Giants. After deciding to return to the KBO for the 2018 season, many expected that he would return to Busan.

When it was announced on Nov. 13 that Hwang had signed with the KT Wiz for 8.8 billion won, it was quite a disappointment to Giants’ fans. A week later, the Samsung Lions announced the surprise signing of Kang Min-ho, who had been the Giants’ catcher for the past 14 season.

With the Giants failing to hold on to their free agents, some fans questioned the club’s contract conditions and ability to meet the needs of their players and worried that the lack of a big name on the roster could potentially lead to a loss of fans in the following season.

After Kang left, the Giants also chose not to re-sign many of its veteran players for the team’s goal of rebuilding, announced on Saturday. Though the Giants have not yet finalized its negotiations with Choi Joon-suk and Lee Woo-min, two other free agents, as well as the team’s foreign players, the re-signing of Son has given the club some breathing room.

Son’s signing solves a major problem for the Giants by minimizing the loss of their key players. Son has proved his consistency throughout his career. Son, who joined the KBO with the Giants in 2007, has a career batting average of 0.325, in 1141 games. Son’s career batting average of 0.325 is the best among the active batters in the KBO, along with Kim Tae-kyun of the Hanwha Eagles.

He is one of the batters in the KBO to have a batting average of above 0.300 for eight consecutive seasons, since he first started playing full time in 2010, and had more than 140 hits for seven consecutive seasons. Son had his best season in 2017, locking in 20 home runs and 20 stolen bases to join the prestigious club. From his accomplishment, Son was considered the top free agent player this season.

In addition, Son has experience with the national team, having represented the country at the 2013 and 2017 World Baseball Classics and helped Korea win a gold medal at the 2014 Incheon Asian Games and the 2015 Premier12 tournament.

“Since I got drafted by the Giants, I never thought I’d be playing for a different team,” Son said. “Rather than challenging myself in the major league, I thought my dream of playing in the majors was more important. I won’t get lazy by signing an FA contract.”

“The fans’ support was the momentum in my decision to stay,” Son said.