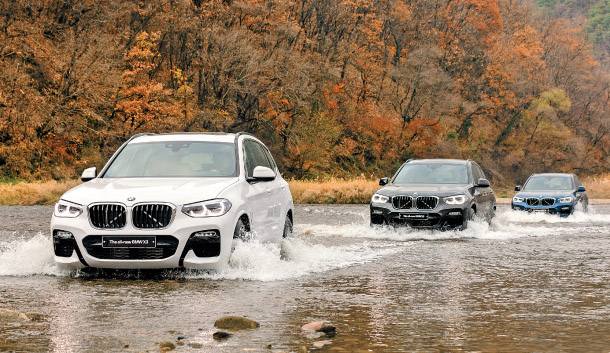 To compete, BMW has upped the ante with its new midsize X3 SUV. The German automaker is fully overhauling the model for the first time in seven years, hoping to differentiate itself from other premium midsize SUVs in the Korean market by providing powerful and tough driving performance. 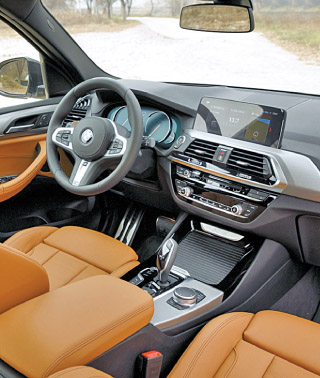 To experience what the new X3 has to offer, this reporter got behind the wheel of an X3 xDrive30d M Sport Package trim last week on a 200-kilometer (124-mile) course from southern Seoul to Yeoju in Gyeonggi. The route included a one-hour off-road course with a gravel bed, sandy road and river crossing.

At first glance, the car’s exterior does not appear much different from previous generations. But upon closer examination, the signature kidney grille on the front has gotten bigger, and BMW has redesigned the fog lamp with a sleeker, modern look.

The overall size hasn’t changed much, but the wheel base has gotten longer by 5 centimeters (1.9 inches), giving the impression that the car has gotten longer when seen from the side. The overhang has been shortened in the front to put the weight in perfect proportion with the back.

According to the company, the car has gotten lighter by 55 kilograms (120 pounds).

Taking it on both urban roads and the highway, it was apparent that the car’s strength comes from the rumbling charm of an SUV. The acceleration was smooth, but the engine noise was apparent. The steering wheel felt clunky and heavy, but the car still offered stable driving performance.

Such features proved useful on off-road courses with unexpected conditions like large pebbles and fine sand. The xDrive system’s adaptive four-wheel drive helped this reporter finish the rough course without much trouble. On a difficult sandy portion, the wheels and damper changed on their own to absorb the shock from the terrain and balance the car.