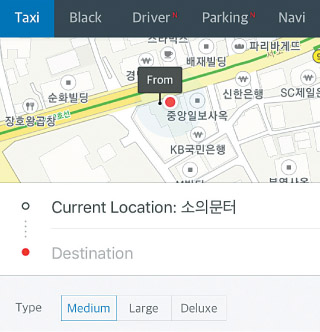 Kakao is revising the algorithm on its ride-hailing app to prevent drivers from cherry-picking customers. [SCREEN CAPTURE]

Hailing a cab through Kakao T (formerly known as Kakao Taxi) is about to get a little easier for customers in Seoul.

The app operator and Seoul Metropolitan Government have worked out a system that will send more customers seeking long-distance rides to drivers with records of doing short-distance trips. The incentive is meant to discourage the practice of taxi drivers rejecting customers who want to make shorter trips, a chronic headache for Seoulites who don’t frequently travel far into the suburbs.

Starting next month, drivers who have records of accepting short-distance rides will receive more calls for long-distance trips on Kakao T.

The long-distance trips are prized by drivers for the higher fares.

If a driver frequently turns down calls from customers, the app will penalize the driver by withholding ride requests for a certain period of time. The algorithm, meant to discourage drivers from turning down rides based on the destination, will go into effect next year.

The measures came at the request of the Seoul government. The government initially requested that Kakao get rid of the feature that lets users enter their destination, but the company declined, claiming it would barely solve the problem of ride denial and only degrade the app’s functionality.

Instead, the company said it would reduce the number of calls that appear on the driver’s end by about two-thirds to limit their options and prevent cherry-picking.

The new algorithm will apply to taxis in operation in Seoul but could affect passengers in Gyeonggi, Incheon and South Chungcheong, which are frequent destinations for long-distance rides.

Kakao T is operated by Kakao, developer of the country’s most widely used messaging app, and boasts over 13 million subscribers. Since its release in 2015, customers have complained about drivers ignoring calls for rides of 1 to 5 kilometers (1.6 to 3.1 miles).

Kim Seong-tae, a lawmaker in the opposition Liberty Korea Party, said the number of ride rejections rose from 57 in 2015 to 180 last year.

In the first eight months of this year, the number of cases has already reached 174.