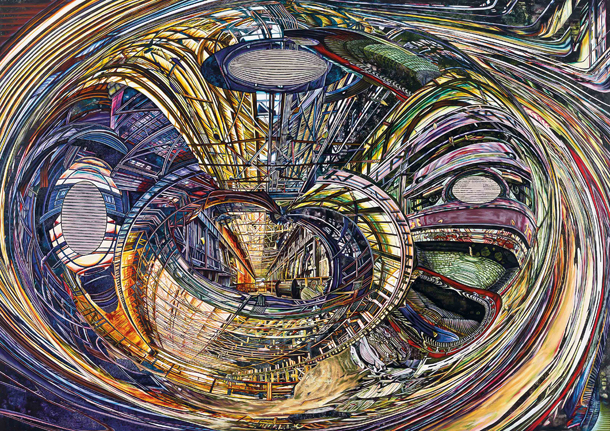 Works by Korea’s abstract painters and young contemporary artists brought in the big bucks at auctions in Hong Kong over the weekend.

“The bid started at 2.8 billion won and soured among the tight competition to end at 4 billion won,” said Son Ji-sung, head of the public relations team of the auction house.

The 1964 painting, created in the very early period of Kim’s so-called New York era (1964-1974), is considered by researchers of Kim to be important, because it shows his transition from earlier half-abstract half-figurative paintings to the celebrated “dot paintings” or large-size abstract paintings made up of dots, in the 1970s.

At the Sunday auction, Seoul Auction saw 78 percent of the artworks it offered sold for a total of 20 billion won. Among the highlights was the calligraphy-like abstract painting “People” by Lee Ung-no (1904-89), which fetched HK$1.9 million, a record price for the artist. And one of the pieces that makes up the “God of Valley” abstract painting series by Oh Sufan, belonging to the generation that followed the dansaekhwa, or Korean monochrome paintings, generation, sold for HK$850,000, higher than expected.

“So, interest in Korean art seems to have spread from dansaekhwa to other abstract paintings,” Son said. She added works by younger abstract painters born in 1950s - Lee InHyeon, Kim TaekSang and Jang SeungTaik - which were all sold, although the competition was not tight.

Among them, contemporary abstract paintings by Choi Sun and Ji Keun-wook, sold for HK$81,250 and HK$118,750, respectively.

The highest bid was fetched by Jin Meyerson’s spectacular painting “Stereovision.” It was sold for HK$525,000.

“Encouraged by the result, Christie’s is considering holding another special section for Korean artists next year,” said an artist who helped organize the section.