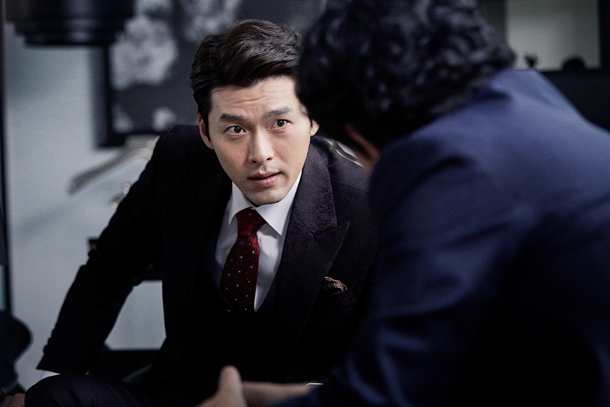 A scene from “The Swindlers” staring the actor Hyun Bin. The movie topped the local box office last weekend. [SHOWBOX]

The big-budget Hollywood superhero movie “Justice League” was dethroned by the domestic crime film “The Swindlers” after winning its first weekend in the Korean box office, data showed Monday.

“The Swindlers” landed in the top spot over the weekend, selling 1.2 million tickets or 61.9 percent of all tickets sold between Friday and Sunday, according to the real-time tally from the Korean Film Council (KOFIC).

The new film starring Hyun Bin and Yoo Ji-tae revolves around a team of scam artists and a corrupt prosecutor teaming up to track down a notorious fraudster for their own purposes. It drew about 1.7 million people since it opened in theaters Wednesday.

The runner-up “Justice League” sold only 258,199 tickets, bringing its two-weekend total to 1.62 million.

American horror thriller “Happy Death Day” dropped a spot to third with 145,999 views, followed by Marvel’s “Thor: Ragnarok,” which was seen by 98,929 people.

“Loving Vincent,” a hand-painted animation project from Poland and Britain, rose two spots to fifth in its third weekend in the box office, drawing 48,797 moviegoers.