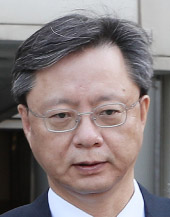 A prosecutor was accused of helping co-conspirators coordinate testimonies during an investigation of the Park Geun-hye administration’s illegal surveillance of public servants and civilians, sources in the legal community said Monday.

According to the sources, the prosecution launched an internal probe into the prosecutor’s link to high-profile suspects in the investigation into the National Intelligence Service (NIS).

Prosecutors have been investigating allegations that the spy agency conducted illegal surveillance of public servants and civilians during Park’s presidency.

Choo Myeong-ho, former head of the NIS’s National Interest Intelligence Bureau, which is in charge of domestic intelligence gathering, was arrested on Nov. 3, 2017 and indicted Wednesday on charges of running the illegal operations and making secret reports to Woo Byung-woo, former senior civil affairs secretary of the Park Blue House, about their outcomes.

Woo and Choi Yun-su, former second deputy director of the NIS, were named as co-conspirators in Choo’s indictment.

Choi was in charge of the agency’s information gathering on domestic affairs from February 2016 to June 2017 and also the direct supervisor of Choo. Choi is also a close friend and law school classmate of Woo.

According to sources in the legal community, the prosecutor acted as a messenger between Woo, Choi and Choo. Woo’s lawyer and Choi had multiple contacts with Choo through the prosecutor throughout the investigation, the sources said.

The prosecution made a surprise move on Friday evening to search Woo’s car and seize his mobile phone in order to investigate alleged evidence tampering, they said.

The prosecutor was dispatched to the legal adviser’s office of the NIS in 2015 and worked there until 2016. At the time, Woo was the senior civil affairs secretary at the Blue House and Choi was the deputy head of the NIS.

Woo, Choi and Choo used the prosecutor as a messenger in an apparent attempt to avoid having direct contacts with one another.

According to the sources, Choo telephoned the prosecutor on Oct. 16, 2017, while he was undergoing an investigation by the prosecution. The prosecutor then immediately contacted Choi, sources said.

The prosecutor also had other suspicious contacts, according to the sources. He had a phone conversation with Jeong Chi-ho, a lawyer for the NIS, immediately before he was questioned by the prosecution on Oct. 23. Jeong was found dead on Oct. 30, and his family maintains that the death was not a suicide. According to the sources, the prosecutor and Jeong had dozens of phone conversations from Oct. 20 to 27.

The prosecution asked the prosecutor why he contacted Choo during the investigation. The prosecutor denied any evidence tampering, claiming he only had casual talks with his acquaintances.

Meanwhile, Woo faced one of the victims of the alleged illegal surveillance in a courtroom on Monday in a separate but related trial. The prosecution said at least eight people were targeted in the surveillance run by Choo and one of them was Lee Seok-su, who served as the independent inspector-general from 2015 to 2016.

In July 2016, Lee launched a special investigation into Woo’s corruption but quickly faced attacks from the Blue House that he had leaked information regarding the special probe. Prosecutors also started an investigation into the alleged leak, and Lee resigned from the post in August 2016.

Woo was later charged with abuse of power, and the Seoul Central District Court heard Lee’s testimony on Monday.

“I received a phone call from Woo that he felt upset about the special inspection,” Lee told the court. Lee launched the inspection after media reported that Woo’s son received special treatment during his military service and that Woo’s family company had misappropriated funds.

Woo reportedly complained to Lee that he was making a fuss about media reports that would disappear after a week.

Lee also said Woo’s office made complaints to his office, discouraging his teammates. Woo also did not cooperate with the special inspection, challenging its legitimacy, and the police also withdrew its support as the probe went on, Lee said.