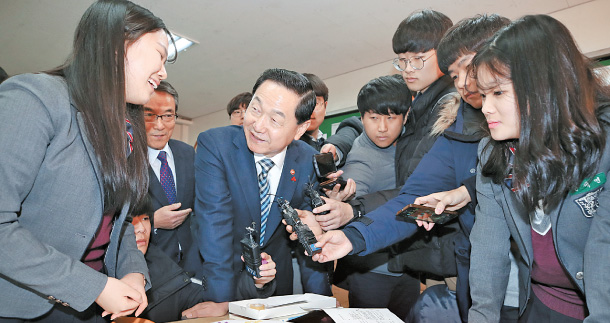 From next month, students at 100 high schools in Korea will be able to choose the classes they want to take and graduate early if they have enough credits, as the government tests a credit-based academic system over the next three years.

The Ministry of Education announced Monday that it will select 60 high schools to test run the university-like academic system for three years. Local education offices will select 40 more. The ministry plans to begin running the system in all high schools by 2022.

Under the credit-based system, students at selected high schools can choose the courses they want to take instead of following the curricula set by the school. Some specialized high schools have partially adopted such a system already.

The Moon administration intends to either partially or completely adopt an absolute grading system for the CSATs by 2022, abandoning grading on a curve. It had intended to adopt absolute grading in all high schools by 2021, but is considering pushing the date to after the revamping of the CSAT grading system. The government wants to reduce students’ reliance on private tutoring outside of school.

“Once students are given the freedom to choose the courses they want to take at their high schools, it will be harder for the school to grade them all on a curve, simply because each class will have a different number of students and some classes will be too small to be graded on a curve,” said Lee Hye-jin, head of the credit-based academic system department at the Education Ministry.

In the test run of the credit-based academic system, students will be given a list of mandatory courses and a list of courses they can elect to take, the ministry said. Some courses will have students from different grades.

Taking into consideration that some schools in rural areas will have a harder time adopting the credit-based academic system because they do not have enough teachers, the Education Ministry said it will try pooling the teachers in rural areas so that they may teach certain courses at several schools. The ministry will also be giving the selected high schools some 40 million won ($36,753) to 50 million won a year to test the credit-based academic system.