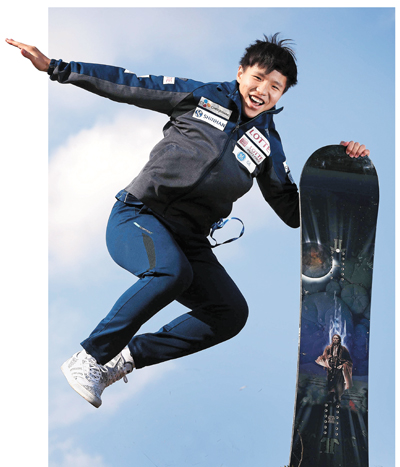 Once a little kid dreaming of representing his country, Cho Hyeon-min has now become the youngest member of the Korean national snowboarding team. 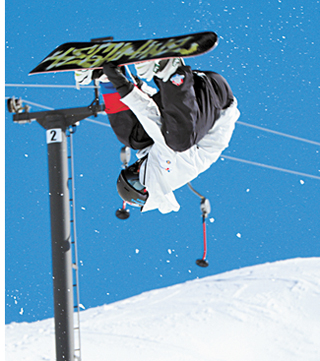 In February 2007, Cho received a great amount of attention at a ski resort as a four-year-old snowboarder, and now, he still receives quite a lot of attention as Korea’s youngest professional halfpipe snowboarder.

In halfpipe snowboarding, competitors slide down the semi-circular ditch and perform their skills and tricks while going down the slopes from one side to another.

At the Olympics, the top 30 halfpipe snowboarders in the International Ski Federation (FIS) World Ranking will receive Olympic berths, while limiting the number of participants to four per country, maximum. At the first World Cup race of the season at Cardrona, New Zealand, in September, Cho finished 17th out of 42 participants, the best out of the other three Korean national team members. If Cho maintains the FIS points standing by Jan. 22, he is likely to become the youngest Korean snowboarder to compete at the 2018 PyeongChang Winter Olympics in February, as Korea is guaranteed at least one spot as the host country.

Currently, Cho is ranked 17th in the FIS Halfpipe World Cup standing, the highest among the Korean halfpipe snowboarders.

In February, Cho won the Europa Cup in Switzerland and became the second Korean to win the FIS Junior World Championships in March.


With the addition of foreign coaches on the national team, Takami Kikuchi and Christopher Clark, Cho has been upgrading his skills for his dream of competing at the Winter Olympics. 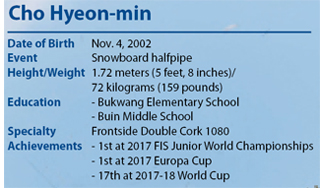 Cho has an interesting snowboard resume. As his father was a part of the local snowboarding club, Cho first encountered the sport at 28 months old. The very first memory related to snowboarding that Cho remembers is competing at a local snowboarding event and finishing fourth at age five.

“My dad tried to make me compete at as many senior events as possible,” Cho said. “If I wasn’t eligible to compete, he made me snowboard as a pre-runner, [who rides down the slope before the tournament to test the slope]. He liked to show my skills to other people.”

For his passion towards snowboarding, one time, Cho snowboarded ten hours a day and worked on his skills at home, adjusting his posture. From his continuous effort, Cho won the halfpipe event at the Korean National Sport Festival for seven consecutive years.

Through his success, he has also faced hardships. Due to his father’s business failing and his parents getting divorced when he was young, Cho lived with his father, who worked as a ski and snowboard instructor. Before Cho had the kind of support he receives now, his father sold his car to buy Cho’s snowboard equipment.

In addition to the financial challenges Cho’s family faced, Cho also had severe injuries throughout his career. During the FIS Junior World Championships, Cho suffered a concussion the day before the competition after landing wrong while training.

“I tried a new trick that I’ve never done before,” Cho said. “But my board got stuck on the pipe so my body just flew off. I blacked out and when I woke up, I continuously had a nosebleed as a side effect.”

Not only that, Cho fractured his rib at the Europa Cup. Despite the injuries, Cho continues halfpipe because he finds the sport “exciting.”

He said, “I want to be a role model for myself. I want to show that I can do better in every event I compete in.”