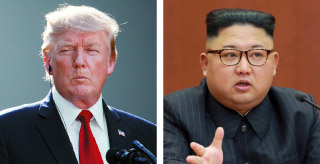 A White House aide who accompanied President Donald Trump on his trip to Asia told me this story. When Trump was meeting with Chinese President Xi Jinping at the People’s Hall in Beijing on Nov. 9, he asked two questions. One was about the history of China and North Korea’s blood-brother relationship. He asked if the two countries still maintained that relationship. The other question was whether Kim Jong-il and Kim Jong-un were different, and if so, how. The White House staffer refrained from disclosing how Xi answered.

Why did Trump ask these “basic questions” to Xi? There are two interpretations. One is that he may have wanted to simply confirm what he was curious about. During his visit to South Korea two days earlier, he unexpectedly asked President Moon Jae-in whether reunification should be attained. It is his personality not to hold back on what he wants to know.

But others analyze that there is more than simple curiosity. He may have wanted to read from Xi’s impromptu answers whether China’s pressure will work on North Korea and if Xi really has any intention of exerting “maximum pressure” to resolve the North Korean nuclear crisis. He was at a crossroads between maintaining a strategy of diplomatic pressure through China and making another decision.

The White House source said that Trump earned half trust from the meeting with Xi and half distrust from the reality afterward. What did he mean by “half trust”? After the Communist Party Congress on Oct. 24, Xi announced a plan to send a special envoy to North Korea, Vietnam and Laos.

A special envoy has visited the three countries before, in 2007 and 2012, but this time, it was different. From Oct. 31 to Nov. 3, Song Tao, head of the International Liaison Department of the Communist Party of China, visited Vietnam and Laos, but North Korea was told the envoy’s visit would be postponed.

Xi’s plan to send an envoy has three meanings. First, the special envoy’s trip would be canceled if North Korea made a provocation before Trump’s visit to China on Nov. 8. Second, Beijing hoped to show off unity with the United States by sending an envoy after the U.S.-China summit. Third, it was a “gift” for Trump because he could now boast that China was sending a special envoy to North Korea as a result of his summit with Xi. When learning of the plan from China, Trump was reportedly pleased and said that Xi could be trusted.

But the honeymoon did not last long. North Korean leader Kim Jong-un was furious that the envoy to Pyongyang was used as an “ingredient” for the U.S.-China relationship and refused to meet with the envoy. It is something unimaginable in the Kim Jong-un era. He had Choe Ryong-hae receive a gift from Xi on his behalf. It was the strongest-ever message that Kim does not care about China.

In the end, the two questions that Trump asked — about the current state of Beijing-Pyongyang ties and the difference between Kim Jong-il and Kim Jong-un — were answered not through Xi’s words but Kim’s actions: in other words, a refusal to meet with the Chinese emissary.

The first response from the United States after learning this was redesignating North Korea as a “state sponsor of terrorism.” Last week, I heard the U.S. Department of Defense considered a plan to recommend the families of American military in Korea be on “voluntary evacuation” in time to visit home for Thanksgiving. Since it was not an official “noncombatant evacuation operation” exercise, it would not be criticized for escalating danger or require an additional budget.

It is a miscalculation to think the North Korean nuclear threat will be addressed as we wish simply because Trump said there will be no skipping South Korea. It is also delusional to think that North Korea and the United States will somehow compromise. Washington’s will to denuclearize the North is stronger than we think. While every player is keeping quiet and studying China’s next move, what we really need to focus on is the next move of the United States after it half-gave up on China.