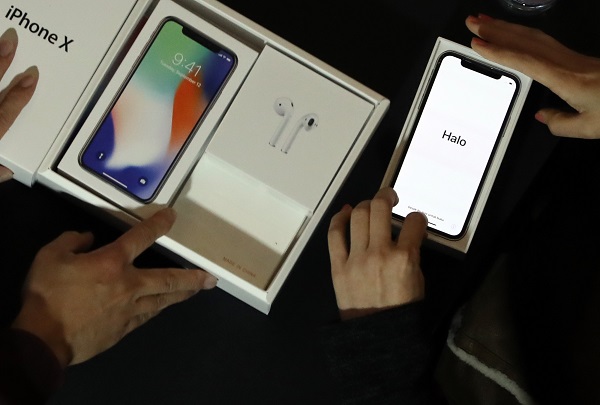 And some customers who took a chance on checking at telecom stores got phones faster than people who took the trouble to preorder them earlier this month. Some preorders may not be delivered until Dec. 7.

When a reporter visited two mobile phone retail branches in Jung District, central Seoul, on Tuesday, both had inventories of iPhone Xs in both silver and black, the two colors offered. A walk-in customer could get a phone right away.

And yet many preorders for the iPhone X had not been fulfilled — as much as 60 percent, according to one media report on Monday.
“It’s true that some customers were able to get iPhone Xs faster at retail branches rather than waiting for preordered phones,” said a source from the mobile industry. “But there were multiple problems.”

A spokesperson for KT said retail shops had stocks because of customers’ tricky ordering habits.
“There are always customers that make preorders at several mobile carriers to get the phone faster and then canceling orders later,” the spokesperson said. “The inventory available at retail shops is usually from canceled preorders.”

In any case, KT and LG U+ are still in the process of getting phones to people who preordered. KT said they should complete those sales within three days. LG U+ did not give a definite time frame.

SK Telecom, which took preorders only to the point they can cover them in four waves, said it completed delivery to all customers that made preorders within the fourth round.

An official from the Korea Communications Commission on Tuesday said it has warned local mobile carriers about the unfairness of the situation.

“We advised the carriers to abide by business ethics and improve the situation to reduce customer complaints,” the official said.
LG U+ announced Sunday it would hold a so-called “Thank U” event to compensate for the long wait. The event is for customers who preordered iPhone Xs but won’t receive them until Dec. 7. The event will run from Dec. 8 through Dec. 21 and prizes will be given to some participants, including top-notch Apple devices like an iMac or MacBook Air.

An Apple analyst at KGI Securities, Ming Chi Kuo, said Apple and its suppliers have addressed major production issues that slowed down the supply of iPhone Xs for months.