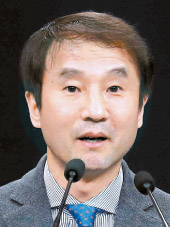 President Moon Jae-in on Tuesday promoted his secretary for political affairs, Han Byung-do, to fill the void left by his former supervisor, who resigned over a graft scandal earlier this month.

Han, a former first-term lawmaker, was named to replace Jun Byung-hun, who faces a bribery investigation.

“I feel heavy responsibility, as I take over this crucial job at a time when opposition parties lead the National Assembly,” the new senior presidential secretary for political affairs told reporters. “I will become a bridge for communication between the Assembly and the presidential office.”

Jun offered to quit on Nov. 16 amid suspicion that his two former aides induced a local home shopping channel to make an illicit donation to a gaming association that was under Jun’s control in return for business favors. He denies any wrongdoing.

Han, 49, is known for his close ties with the president. He worked as a key election campaigner for Moon in 2012 and earlier this year. Han was imprisoned for leading a pro-democracy movement in the late 1980s. He was elected to parliament in 2004.

In 2009, he served as an adviser to a foundation for the late liberal former President Roh Moo-hyun. In 2012, he worked as special secretary for Han Myeong-sook, then-leader of the Democratic United Party, a precursor to the Democratic Party.

A native of Iksan, North Jeolla, Han received a bachelor’s degree in journalism and communication from Wonkwang University in 1990.