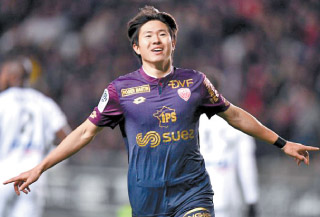 Although the team lost 2-1, Kwon’s goal was his third in three straight matches.

While Dijon was down 1-0, Kwon scored the equalizer in the 15th minute off a pass from Frederic Sammaritano.

But a goal by Amiens’ Quentin Cornett in the 50th minute set Dijon back, and the team was unable to tie the match.

Dijon is now ranked 13th in France’s Ligue 1 with five wins and seven losses this season.

After the match, Kwon was given a score of 7.3, the highest on the team, by Whoscored.com, a football statistics website.

Kwon joined Dijon in the middle of last season and appeared in eight matches. He was unable to score any goals, but this season, he is doing better, starting in the first four matches of the season.

After scoring his Ligue 1 debut goal against Stade Rennais FC on Aug. 20, Kwon continued his stride and is now the highest scorer on the team, having scored five goals in 13 matches so far this season.

Kwon made his professional debut with the Suwon Samsung Bluewings in Korea in 2013 after playing for Suwon’s youth team at Mae Tan High School. During his four years with the youth team, Kwon played in 109 games, recording 22 goals and nine assists.

Once Kwon turned professional, Kwon played a leading role in helping Suwon win the 2016 Korea FA Cup as well as finishing runner-up in the 2014 and 2015 K League Classic seasons.

Continuing his success, Kwon was called up by the Korean national team to compete at the 2015 East Asian Cup, making his international debut playing against China.

Although Kwon did not leave much of an impression in the match, his performance in subsequent games did.

On Sept. 3, 2015, he scored his first goal for the national team during a World Cup qualifying match against Laos. He was lauded by the team for his smart plays and strong work ethic.

During the 2016 Rio Olympics, he helped Korea advance to the quarterfinals by scoring two goals under head coach Shin Tae-yong. Within less than a year, he was called up to the national football team again to help in their remaining World Cup qualifiers, once again under head coach Shin.

In January, Kwon transferred from Suwon to Dijon, turning down a $5 million offer from Al Jazira in the United Arab Emirates - $3 million as a transfer fee and $2 million as annual pay.

Instead, Kwon signed a three-year contract with Dijon, with 1.2 million euros ($1.4 million) in transfer fees and an undisclosed annual salary.

Kwon’s transfer fee was the third highest that the French club ever paid in its history.

In the French league, a team is demoted to the lower division if it finishes the season ranked 18th or below.