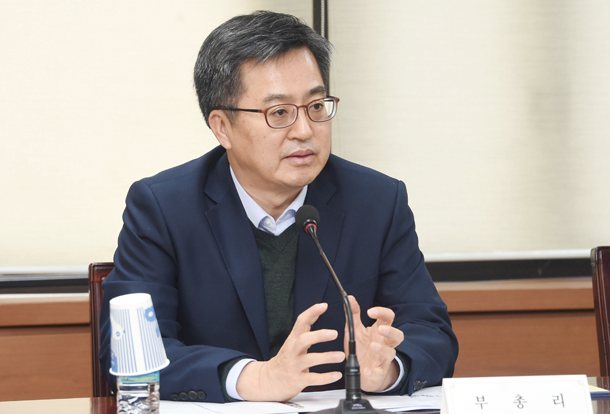 Deputy Prime Minister for the Economy Kim Dong-yeon first mentioned “restructuring,” a taboo word in the liberal government, at a debate on Nov. 24. [YONHAP]

The government under President Moon Jae-in has begun to address industrial restructuring a half year into its term. The trouble is it does not seem to have a plan or direction. Deputy Prime Minister for the Economy Kim Dong-yeon defined three principles in pursuing restructuring. It should be pre-emptive or preventive, prioritize industrial competitiveness over financial reasoning, and be led by the market rather than the state. What he said was flat and ambiguous. His guidelines offer no indication of what the government will do.

The first guideline is plainly unrealistic. No one can identify signs of troubles at all companies in our economy or prevent them from spilling over onto other companies or sectors. Companies by nature hide their woes until they are near bankruptcy.

The second guideline is even less clear. A corporate entity is evaluated in numbers: the numbers on its balance sheet and profit and loss statement. The health of a company must be examined like that of a human body. Blood sugar levels and blood pressure are examined and treated with drugs when they are deemed too high. Without concrete numbers to measure industrial competitiveness, any decision on a company’s viability could be swayed by political influence and fall prey to favoritism or other form of corruption.

The third guideline sounds even more nonsensical. Restructuring cannot be done without funds to clean up a mess. Shareholders, creditors and employees would not easily agree to pain-sharing. Someone has to take the lead. That role usually falls to state-run banks. But a state-run lender must not take too much of the debt load. Leaving the cleaning up to the market sounds good in theory, but not in practice. That is more or less saying that commercial banks should do the unpopular and complicated work and force vibrant companies take on ailing enterprises on behalf of the state.

Paik, a former professor specializing in renewable energy, was recruited to head the ministry largely to oversee the government’s agenda of weaning Korea off both fossil fuel and nuclear power. He does not have experience on the corporate industrial battlefield. Restructuring is often accompanied by bloodbaths. Two decades ago, former FSC chief Lee Hun-jai likened restructuring to a war zone awash in blood and body parts. In other words, good vision and a cold head and heart are needed in a commander. Resolve is demanded of the commander to eliminate weak businesses and save those that can be saved. The scholarly minister is hardly fit for such a ruthless and risky job.

Economic policies have turned decisively pro-labor. While campaigning in March, candidate Moon Jae-in vowed to dockyard workers in Changwon, South Gyeongsang that they won’t be hurt by restructuring. We will see how successful the government will be when it zeroes in on its first targets — Sungdong and STX. I hope my fears about the government’s restructuring campaign turning into a crusade to save zombie companies proves to be wrong.