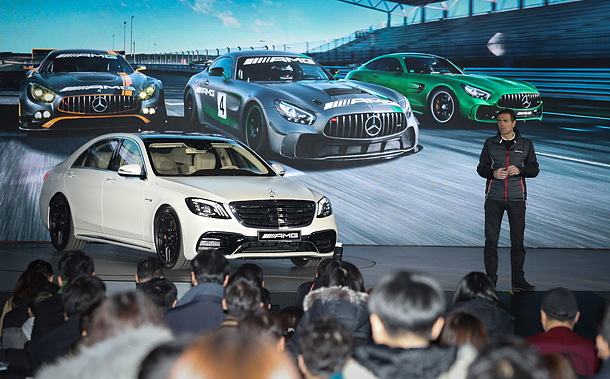 AMG, the high-performance division of Mercedes-Benz, plans to open the world’s first AMG-branded speedway in Korea next March.

The local unit of Mercedes-Benz said Thursday that it will work with Samsung C&T to rebrand its Everland Speedway in Yongin, Gyeonggi, about an hour’s drive from Seoul, to AMG Speedway. The company plans to offer driving programs and experiences related to the AMG brand. The venue will also house a lounge exclusively for AMG car owners.

“[Everland Speedway] has an excellent location and qualified race track,” Mercedes-Benz Korea CEO Dimitris Psillakis said during a press event in Seoul celebrating AMG’s 50th anniversary. “In 2018, we will be able to house all AMG cars and activities in this location.”

Samsung built the Everland Speedway in 1992 as one of the first racing tracks in Korea. Samsung’s chairman, Lee Kun-hee, was reportedly a car enthusiast.

Martin Schulz, vice president of sales and marketing at Mercedes-Benz Korea, said the project with Samsung derives from an earlier partnership with Samsung Card, in which the Korean card company helped the automaker launch a Benz membership card in September.

“The speedway will not only be a circuit for AMG cars, but will have diverse facilities for experiencing the brand as well,” Schulz said. “It is open to not only AMG customers but the brand’s admirers and fans too.”

AMG first entered Korea in 2003 and sold two cars that year. With continuous growth, the high-performance automaker has sold 2,357 cars in Korea this year as of October, about 34 percent more than last year.

Mercedes-Benz Korea says it will continue to expand customer service for AMG customers in the coming years. It recently launched a dedicated AMG training program for technicians in Korea and invited experts from its headquarters in Germany. The qualified technicians will be dispatched to 10 service centers around the country to offer premium services for AMG customers.

On the back of rising demand for high-performance cars in Korea, Mercedes-Benz said it would sell 24 AMG models across diverse segments, including sedans, coupes, sport utility vehicles and convertibles, available in the country.

On Thursday, the automaker unveiled the Mercedes-AMG 63 4MATIC+ Long, equipped with AMG’s 4-liter V8 biturbo engine that can bring the car from zero to 100 kilometers (62 miles) an hour in 3.5 seconds. The company began delivering the car to Korean customers on Thursday.

Mercedes-Benz also unveiled the 2018 Mercedes-AMG GT for the first time in Korea. It will hit the market next year.

A special edition of the Mercedes-AMG GLA 45 4MATIC, decked in black and yellow to celebrate AMG’s 50th anniversary, was showcased at the press event. It launched in September as a limited-edition model with 50 cars.

AMG was founded in 1967 by two racing engineers, Hans-Werner Aufrecht and Enhard Melcher, who were interested in tuning and developing engines for racing cars.

The company began collaborating with Mercedes-Benz in the 1990s and became a wholly-owned subsidiary of Daimler in 2005.