Big budgets don’t guarantee big success: Some of 2017’s most highly anticipated films flopped after audiences found them to be unoriginal

Big budgets don’t guarantee big success: Some of 2017’s most highly anticipated films flopped after audiences found them to be unoriginal 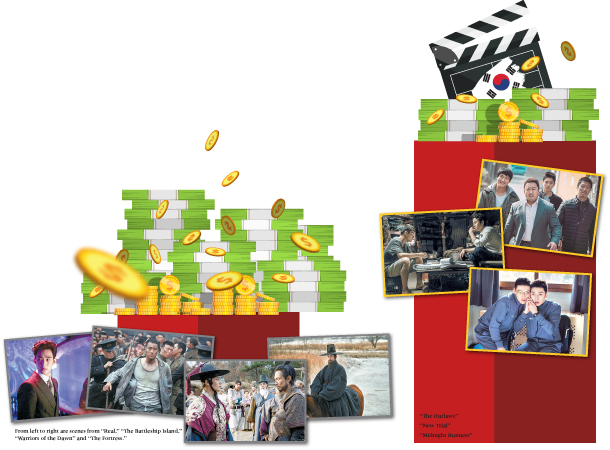 In the beginning of 2017, moviegoers were excited about a number of star-studded, high-budget flicks scheduled for release throughout the year. But of the many that hit the big screens, only a few, like “A Taxi Driver,” “Confidential Assignment” and the currently running “The Swindlers,” managed to draw large audiences while others like “Real,” “The Battleship Island” and “Warriors of the Dawn” failed to drum up interest after their release.

From January to October, the number of tickets sold for locally produced movies dipped by more than 10 million year-on-year to 88.8 million, according to a report by the Korean Film Council. During the same period, however, the number of admissions sold for foreign movies surged by nearly nine million to reach 94.03 million, accounting for 51.4 percent of the market share.

The primary reason for the decline in sales can be explained by the disappointing performances of highly anticipated local blockbusters which cost at least 10 billion won ($9 million) to make.

CJ E&M’s mega-blockbuster “The Battleship Island,” starring Hwang Jung-min, So Ji-sub and Song Joong-ki, only sold 6.59 million tickets and faced backlash after being accused of monopolizing movie screens and distorting history. Though ticket sales were not low, they were not high enough, considering the 20 billion won it cost to make the period epic.

“Real,” featuring superstar Kim Soo-hyun and singer-turned-actor Sulli, did not satisfy audiences either. Despite Kim being praised for his performance in the film, the 10-billion-won movie ended up selling merely 470,000 tickets after being criticized for its obscure plot.

Additionally, the number of crime and historical movies with unoriginal plots have prompted moviegoers to turn away from local films.

“Over the past few years, most Korean movies have been confined to similar genres with similar stories,” said film critic Kim Hyung-suk. “Most high-budget flicks made with more than 10 billion won have been either crime or historical films due to their assumed commercial appeal, and audiences have grown tired of them.”

Kim also explained that the switch to a liberal government has affected moviegoers’ choices. Most crime movies are about good triumphing over evil, “which the current administration is attempting to achieve in reality,” while the majority of historical epics attempt to arouse nationalism.

The growing monopoly of major film distributors has also contributed to the lack of diverse genres on offer, according to Kim, as “many of the flicks they chose to invest in have been either crime or period flicks.”

Making up for the poor performances of the big-budget movies, smaller budget films with well-organized plots had a relatively strong showing this year.

The relative success of smaller films reflects the audience’s growing interest in unique and lighter films, according to movie critic Hwang Jin-mi.

“It seems that moviegoers have a growing preference towards characterheavy and less serious movies instead of giant blockbusters that attempt to satisfy everyone through similar characteristics, like being male-centered and adding emotional elements. [To further develop the local film industry], changes need to be made,” Hwang said.

But before 2018 arrives, two more local blockbusters may raise the annual performance of local films. “Steel Rain,” an action drama revolving around a former North Korean intelligence agent and a senior member of the Korean security services working on a secret mission to prevent the breakout of a nuclear war on the Korean Peninsula, hits theaters on Dec. 14, while the fantasy drama “Along With the Gods: The Two Worlds,” which centers on the sudden death of a man and his afterlife trials that evaluate how he lived his life and determine where he will spend the rest of eternity, will be released on Dec. 20.