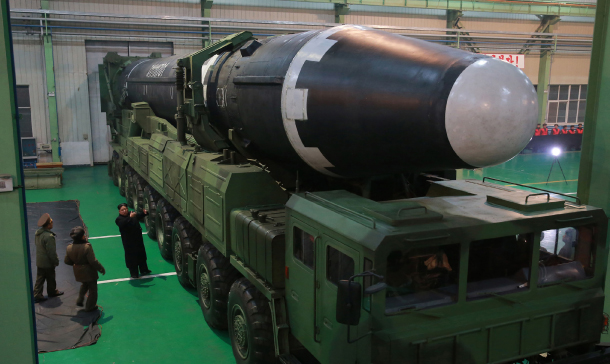 A slew of photos released by North Korea’s official newspaper Thursday regarding the intercontinental ballistic missile (ICBM) launched a day before vividly showed the regime’s intention of increasing the range and payload of its missiles.

Pyongyang had announced in an English dispatch Wednesday that it tested an all-new Hwasong-15, an ICBM “tipped with super-large heavy warhead which is capable of striking the whole mainland of the U.S.”

The missile was touted as the “most powerful” ICBM the country has ever developed to date, which has “much greater advantages in its tactical and technological specifications and technical characters” over the Hwasong-14, which the North tested twice last July.

Pyongyang was not completely bluffing, according to images from the Rodong Sinmun Thursday.

With its new features, the Hwasong-15 looked more like the Soviet Union’s SS-19, an ICBM test-flown during the 1970s.

“North Korea’s Hwasong-15 appears to have a diameter 30 centimeters [11.8 inches] wider than the Hwasong-14, and its length is more than 2 meters [6.5 feet] longer,” said Shin Jong-woo, secretary general of the Korea Defense and Security Forum. “It looks more like a new missile copied off China or the Soviets, rather than a modified version of what it previously tested.”

Another difference is that the Hwasong-15 has two main engines, whereas the Hwasong-14 has one, an 80 ton-force Paektusan-1 with four surrounding vernier engines.

“A missile has to be built larger in order for it to travel longer and have a heavier warhead payload,” said Lee Choon-geun, a senior research fellow at the Science and Technology Policy Institute in Sejong. “A larger missile requires more engine power, which North Korea finds hard to achieve by using only one of the engines it already has. That’s why it attached two main engines.”

The tip of the Hwasong-15 was also much rounder than the Hwasong-14, which guarantees more stability in flight.

“A sharper tip tends to alleviate air resistance, making the missiles faster and harder to target,” said Lee. “But the downside is that the warhead will heat up more as it re-enters the atmosphere.”

South Korea’s military has not mentioned any significant improvements in the North’s latest test, as is customary, but President Moon Jae-in was quoted by his spokesman Park Soo-hyun as telling U.S. President Donald Trump in a telephone conversation Wednesday that the missile “improved in efficiency” over the previous versions tested.

Trump’s defense secretary, Jim Mattis, said the Hwasong-15, which peaked at an altitude of 4,500 kilometers (2,796 miles) before landing in the East Sea, was the highest a North Korean missile has ever reached.

“He’s always appeared at [North Korean] missile launch sites,” said a South Korean government official, adding local authorities were digging into his whereabouts. “It doesn’t seem like he was purged. Maybe Ri was promoted to director of the Munitions Industry Department, in light of the fact that he was named a standing member of the Workers’ Party’s Central Military Commission in early October during a Workers’ Party meeting.”

South Korean authorities who spoke with the JoongAng Ilbo said they first were aware a North Korean missile launch was imminent last Monday, when Seoul traced radar emissions from the North, which means a missile test was forthcoming in the next several hours to days. The emissions are part of a trial exam testing the missile’s components, chiefly whether its telemetry systems were properly working.

Officials in the Blue House, Foreign Affairs Ministry and Unification Ministry were ordered to be on standby, sources with knowledge of the case told the paper.