Line No. 9 descends into chaos with six-day strike

Line No. 9 descends into chaos with six-day strike 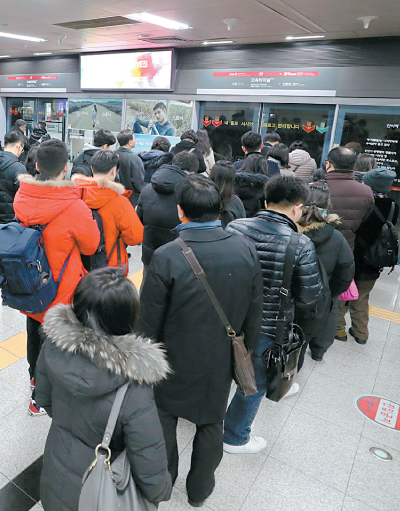 People wait in queues to get on trains on subway line No. 9 on Thursday morning, the first day of a six-day strike by employees. [YONHAP]

The strike by employees on subway line No. 9 in Seoul on Thursday resulted in rush hour havoc in the morning as people stood in unending queues to get on trains that came already packed.

Many blamed the subway corporation, which had announced that trains would run on time despite the strike.

“We are very sorry to be inconveniencing you with the strike that will take place from Thursday to Tuesday,” said Seoul Metro Line 9 Corporation in a notice it posted throughout subway stations on Line No. 9 and on its website on Thursday. “But we promise to run trains on time during the rush hours.”

Employees of subway line Nos. 1 through 8 are not involved in this strike.

Employees on line No. 9 were found to be working longer hours and more days than employees on line Nos. 1 through 8, run by the Seoul Metropolitan Government, according to a report by then-Democratic Party Rep. Jin Sung-joon’s office in 2015.

“We are being exploited at our workplace,” said Park Gi-beom, head of the union. “We should stand up for our rights and change how things work at line No. 9, which people call hellish because it’s so packed during rush hours.”

The Seoul Metro Line 9 Corporation, which runs trains on the line, was established by French company RATP Dev Treansdec Asia and Hyundai Rotem. The French company owns 80 percent of the company.

The labor union has been demanding the Seoul city government buy the company and run it.

People stood in long queues on a platform at Yeomchang Station around 7:50 a.m., when a reporter arrived on scene. A train came in at 8:03 a.m., but was already packed. The doors opened and people started to push. Shouts of frustration could be heard. Barely anyone was able to get on the train.

“I stood here for 30 minutes and saw two trains pass by with people inside packed like sardines,” said Park Jae-yoon, a 26-year-old office worker who commutes from Yeomchang Station to Sinnonhyeon Station every day. “The trains come and open their doors but no one is able to get in. I’ll probably try to get a cab or bus to work but I’m angry because I would have done that earlier if the company hadn’t announced that all trains will run on time.”

People stood in queues outside the management office of the subway station demanding refunds.

The office had them write down their names and contact information so they could get in touch with them for ticket refunds.

“It’s not easy to get on a train on line No. 9 on a normal day,” said Lee Kyung-rim, a pregnant, 32-year-old office worker at Dangsan Station, a transfer station for lines No. 9 and 2. “Pregnant women can’t expect to get seats anyway on line No. 9 but today things seem much worse.”

The Seoul Metro Line 9 Corporation said some of the chaos was caused by two trains breaking down in the morning.

“We will be hiring more employees to run the trains on time,” said a spokesperson for the company. “We will be running the trains 502 times a day, the same as on any normal day.”