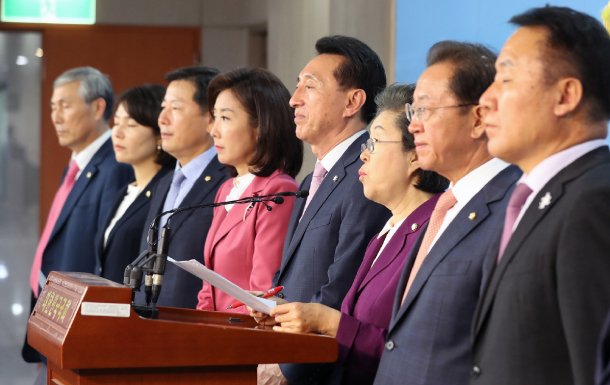 Lawmakers of the main opposition Liberty Korea Party on Oct. 17 call for the immediate disbanding of a fact-finding committee that has looked into the wrongdoings of former administrations. [YONHAP]

The Moon Jae-in administration could actually be seen as a Honam government, based on its overwhelming support from the region and Moon’s heavy reliance on officials from the area when making key appointments. But his administration seemed to be more similar to that of Kim Young-sam than the government of Kim Dae-jung, a politician from Honam.

Most of all, the Moon administration’s campaign to “eradicate long-rooted evils” is similar to the legacy of the late Kim Young-sam. In both the Moon and Kim administrations, former presidents faced trials. The only difference is that Kim had targeted the military. But both administrations enjoyed popularity by erasing the past.

Presidents Kim and Moon are both from Geoje, South Gyeongsang. They both contributed greatly to the advancement of democracy. But their views toward politics are very different. Kim, who was a nine-term lawmaker, was a parliamentarian.

He ran the country with politics of compromise and coalition. By merging three parties, he controlled the majority. But Moon doesn’t follow such a political practice. At least, he doesn’t want to beg for the oppositions’ cooperation. Instead, he puts efforts for direct communication with the public.

When he addressed the people recently, Moon said, “Our politics fell behind because of indirect democracy. The Moon administration believes that working together with the collective intelligence of the people is the path for success.”

Since then, the public petition board of the Blue House Internet site was flooded. Among them are petitions to abolish the law barring abortion and to protest the release of an infamous child sex offender from prison after his term. Petitions to bar former President Lee Myung-bak from leaving the country and to dissolve the conservative main opposition Liberty Korea Party through a constitutional trial are also ranked high on the board, indicating that it is also working as an arena to unite Moon followers.

Moon was not always against party politics. When he was leading the opposition party, he was a parliamentarian. During her presidency, President Park Geun-hye once participated in the public signature drive to pass economic legislations when the legislature was deadlocked.

At the time, Moon, who was the chairman of the Democratic Party, reacted with anger. “It is absurd. It is the president’s duty to talk to and persuade the opposition party over a bill, but she abandoned it,” he criticized, urging Park to respect parliamentary democracy.

His position probably changed because of a desire to press the opposition hard using the power from his high approval rating, just like Park did during her presidency.

The president and the National Assembly have maintained different relationships depending on the era. During the military dictatorships, presidents reined in the legislature, but the relationship has not been amicable since the presidency of Roh Moo-hyun.

The National Assembly has long been a target of criticism. And yet, all reforms are completed in the end with legislation. The Moon administration is no exception, as it has enjoyed high approval ratings since its launch in May.

Moon will soon face his seventh month in office, but not a single piece of legislation was passed so far.

The situation is so serious that the government is saying that a decision to relocate the Ministry of Interior and Security to Sejong City is a major achievement. Even next year’s budget bill is not going smoothly.

Perhaps because of the situation, the Blue House proposed a meeting with leaders of the ruling and opposition parties, but the opposition parties showed icy responses. It is not a surprise because almost all government ministries are doing their best to eradicate the “old evils.”

The ruling party and powerful politicians and officials are thinking that now is the time for former President Lee to go to prison, because Park is imprisoned now. The president even said “ministers who faced fierce oppositions from the opposition parties during confirmation processes are actually more capable.”

No wonder the Blue House’s abrupt request for cooperation faced rejection, but it still made the proposal anyway because it wanted to stimulate Moon followers’ emotion.

When Moon was the opposition leader, he and the Democratic Party criticized Lee and Park for being high-handed and obstinate and turning a deaf ear to their critics. They had pressured the presidential offices of Lee and Park to talk and negotiate. Now that Moon is in the Blue House, he is following suit by ignoring his critics and pleasing his followers because of the arrogant notion of “Only we are righteous.”