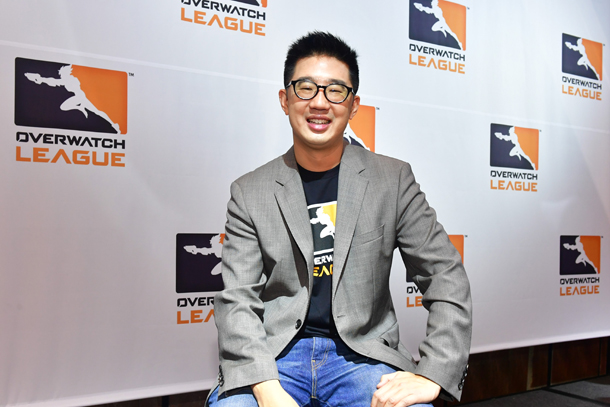 Kevin Chou, CEO of KSV and co-founder of Kabam, at a press conference in August announcing the launch of Seoul Dynasty, the company’s Overwatch team. [KSV ESPORTS]

KSV eSports, a gaming company that manages professional players in Seoul, has acquired Samsung Galaxy, the winning team from this year’s League of Legends Championship, as the company seeks to expand its territory in the global e-sports scene.

KSV eSports announced through a statement Friday that it had finalized the acquisition of Samsung Galaxy, considered one of the top teams in the popular video game League of Legends.

Widely known as LoL, the multiplayer online battle arena game developed by Riot Games, a U.S.-based developer owned by China’s Tencent of China, is one of the most popular games in the world. More than 60 million people viewed the online broadcast of this year’s championship finals on Nov. 4 in Beijing, according to Tencent, breaking the previous record set during the 2016 finals, which attracted 43 million viewers.

“League of Legends is one of the top e-sports games in the world, and KSV has been looking for the right opportunity to enter this global e-sport since the summer” said Kevin Chou, chief executive of KSV. “From the beginning, we’ve explored acquiring a League of Legends team that aligned with KSV’s long-term goals and vision. In addition to their impressive championship victory, we admire Samsung Galaxy’s focus on team play and felt it was a strong culture fit with the rest of our teams and company.”

“I’m excited about competing in League of Legends World Championships with KSV,” said Kang Chan-yong, a member of the Samsung Galaxy team who plays under the nom de guerre “Ambition.” “For me, it has been a long road with League of Legends, with some tough challenges along the way. The coaching staff and teammates have always had my back, and we will work our way up to victory once again with KSV.”

The addition of Samsung Galaxy expands the number of games that KSV covers to four, including Overwatch, Battlegrounds and Heroes of the Storm.