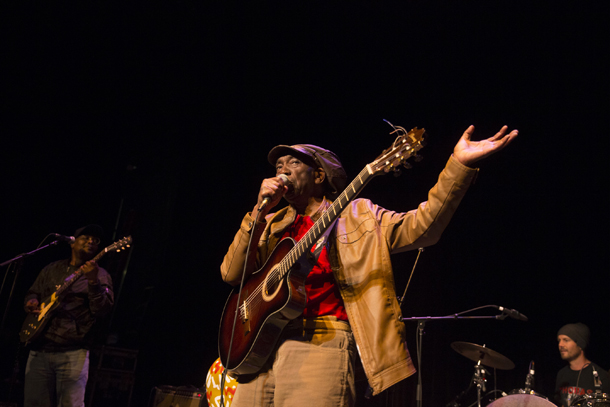 As Zimbabweans celebrated the ouster of dictator Robert Mugabe, they danced in the streets to previously banned protest songs by one of the country’s most famous musicians, Thomas Mapfumo, a man jailed by the country’s former white rulers and hounded by the black government that succeeded them. [AP/YONHAP]

As Zimbabweans celebrated the ouster of dictator Robert Mugabe, they danced on the streets to previously banned protest songs by one of the country’s most famous musicians - a man jailed by the country’s former white rulers and hounded by the black government that succeeded them.

The musician, Thomas Mapfumo, watched the euphoria from exile in the United States. But he’s not rejoicing: Mugabe’s and his cronies still run the country.

“I think there’s nothing to celebrate about,” Mapfumo said this week in an interview with The Associated Press in the college town of Eugene, Oregon where he has lived since 2004. “It’s still the old train that we’re riding but they’ve got a different driver now.”

When Mugabe resigned on Nov. 21 under military pressure, ending his iron-fisted rule of 37 years, Mapfumo’s songs blasted from car speakers to the crowds partying on the streets. For years, his music had been banned from public airwaves and was played in secret by Zimbabweans.

With Mugabe’s party, ZANU-PF, still in power, there’s no sign Zimbabwe will overcome its long history of repression and political corruption, Mapfumo said. Former Vice President Emmerson Mnangagwa, now the party head, was sworn in as president on Nov. 24. Nicknamed The Crocodile, he is accused of helping direct the slaughter of thousands of people in ethnic massacres in the 1980s.

“The root cause of our problems is ZANU-PF. There are still people who still believe in those bad policies,” Mapfumo said, citing in particular the takeover of white-owned farms - many of which went to Mugabe’s allies - that led to the collapse of Zimbabwe’s agricultural production.

Zimbabweans are electrified about the possibility of Mapfumo returning home to perform with his band, The Blacks Unlimited, for the first time since 2004, when he left the country with band members and relatives.

“I thought we will never see him play here again, but now I am very hopeful he will return home for a show of our lives,” said Shupai Muchingami, a fan in Harare, Zimbabwe’s capital.

Mapfumo, known as the Lion of Zimbabwe, confirmed to AP that he wants to perform in the southern African country next year and that his manager is trying to arrange a gig.

His upbeat music, featuring the traditional mbira thumb piano and an electric guitar tweaked to sound like an mbira, often carried lyrics of rebellion in the Shona language and in English. He called the musical style he invented “chimurenga,” which means “struggle” in Shona.

During the guerrilla war against the white racist regime when the country was named Rhodesia, Mapfumo sang lyrics like “Mothers, send your sons to war” in support of the struggle. After Zimbabwe achieved independence, he performed in a 1980 celebration concert that also featured Bob Marley.

But several years later, Mapfumo became disenchanted with the government as Mugabe and his ministers enriched themselves while Zimbabweans became more destitute.

“When I see something wrong I have to point it out,” Mapfumo said. “I can’t stand by and look when these things are happening to my people. That’s not what we fought for. We fought in the struggle because we wanted to be a free nation. We were fighting for democracy, for freedom of speech, freedom of movement.”

Zimbabwe, he said, might need a mass revolt to usher in true democracy.

“The country belongs to the people. The soldiers won’t do nothing if the people revolt. They will just stand by,” Mapfumo said in the interview in his small apartment. Mapfumo, who drives a Dodge minivan in Eugene, still chafes at the government’s confiscation of several of his BMWs in Harare years ago, which he labeled as government harassment.

“The reason was because I was singing against the ruling party, the government and the corruption that was going on,” he said.

A friend was later told he could collect the cars for Mapfumo, but they were gone when he went to get them.

“They’d been sold by a corrupt policeman,” Mapfumo said.

Mapfumo believes Zimbabwe needs young leaders and said he admires Nelson Chamisa of the opposition Movement for Democratic Change party. But Mapfumo ruled out performing in support of him or any other politician.

Mapfumo plans to keep up his criticism in a new album he’s working on that includes a song he wrote shortly before Mugabe resigned. He sang part of it during the interview. “Rise up Zimbabwe, wake up Zimbabwe, open your eyes,” Mapfumo sang in a deep voice.