Korea Inc. is warming up to local start-ups

Korea Inc. is warming up to local start-ups 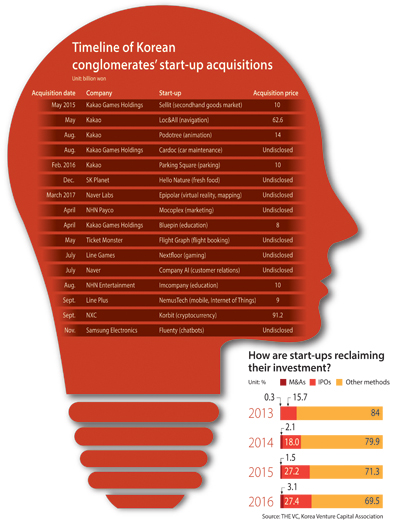 Korean conglomerates are on the hunt for local start-ups.

Mergers and acquisitions have proven useful for conglomerates hoping to secure talented developers and save on research and development costs. As the technological competence of Korean start-ups has improved, the appetite for these high-potential companies has grown.

Samsung Electronics, the largest electronics maker in the country, recently acquired Fluenty, a chatbot developer, for an estimated 5 billion won ($4.6 million). The tech giant has a history of acquiring foreign start-ups, such as Silicon Valley’s Viv Labs, founded by the creators of Siri, and the IoT developer Perch, but Fluenty is Samsung’s first acquisition of a Korean start-up.

Fluenty, founded in 2015, entered the spotlight last year when it joined Samsung’s start-up incubating program Creative Square as one of its first members. It gave Samsung a chance to test the capabilities of Fluenty’s engineers.

By all accounts, Fluenty passed with flying colors. As part of the deal, Samsung will acquire the company’s technology and 10-person staff.

“Considering the symbolic meaning of Samsung in the tech industry, [this acquisition] will become a turning point for local conglomerates to change their perception about acquiring start-ups,” Hwang Sung-jae, co-founder of Fluenty, said.

Few Korean companies have actively sought to acquire start-ups, and when they do, it is usually to secure technology that can complement their businesses.

And this year in March, Naver Labs, the research arm of the Korean internet giant Naver, acquired the 3-D mapping start-up Epipolar to collaborate on a mobile navigation app.

Analysts believe this new wave of acquisitions could become a norm. For conglomerates, the start-ups offer a pool of talent with specialized skills and experience in the business world, standing in contrast to the current hiring method of mass recruitment that follows the academic year.

Still, only 3.1 percent of all Korean start-ups manage to be acquired based on 2016 figures accumulated by Korea Venture Capital Association. In the United States the rate is as high as 86 percent and Europe 59 percent.

“The No. 1 complaint from Korean start-ups is that conglomerates do not actively acquire start-ups,” said CEO Park Jin-seok of Go Pangyo, a start-up that links start-ups nested in Pangyo, Gyeonggi, through an online platform.

One reason conglomerates might be hesitant is public perception that their acquisitions might be predatory. Because of the vast influence they wield in Korean business, conglomerates often face accusations of infringing on the rights of smaller companies.

“When conglomerates push ahead with M&A deals, they have to deal with the public questioning whether there was any favor granted to them,” said Park Yong-soon, a director at the Ministry of SMEs and Startups.

Park added that M&A departments in conglomerates may be hesitant to take on the risk of acquiring a start-up because they would be held responsible if the outcome doesn’t meet expectations. And since Korean start-ups mostly target the domestic market, conglomerates aiming to boost their competence for export markets are often not interested in local start-ups.

Strict government regulations have also been a barrier to M&A expansion. Even if companies set up a separate venture capital firm to acquire start-ups, these firms easily become targets of public criticism and scrutiny because they are categorized as affiliates of conglomerates.

In Korea, active cooperation between conglomerate affiliates is often perceived as an unfair business practice.

“Easing regulations on conglomerates inking M&A deals with start-ups could actually contribute to invigorating business for start-ups,” said Prof. Lee Min-hwa of the Korea Advanced Institute of Science and Technology, who served as the first chairman of the Korea Venture Capital Association.

“The public also needs to take on a more positive view of M&A deals led by conglomerates and understand it is a necessary step to stay competitive in the global market.”