Deal finally made on a budget plan for next year

Deal finally made on a budget plan for next year 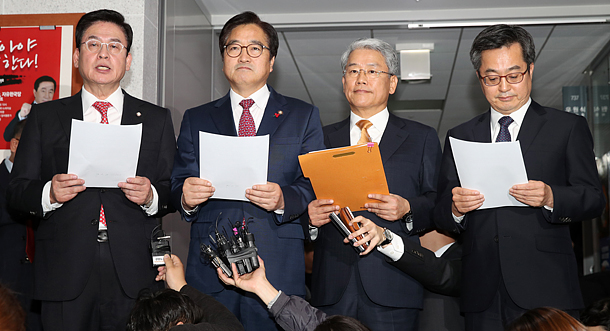 Floor leaders of the major parties and the deputy prime minister for the economy hold a press conference at the National Assembly on Monday to announce a compromise plan on the government’s budget bill for next year. From left: Rep. Chung Woo-taik of the Liberty Korea Party, Rep. Woo Won-shik of the Democratic Party, Rep. Kim Dong-cheol of the People’s Party and Kim Dong-yeon, deputy prime minister for the economy and finance minister. [YONHAP]

The ruling and opposition parties on Monday struck a deal on the Moon Jae-in administration’s budget plan for next year, allowing the government to move forward with its plan to create jobs by hiring more public servants and increase tax rates for top-earning individuals and companies.

Floor leaders of the three main parties held a press conference in the evening and announced their agreement on the government spending plan for next year. The budget bill of 429 trillion won ($395 billion) will be rewritten based on the agreement and a vote will take place today.

Rep. Woo Won-shik of the ruling Democratic Party, Rep. Chung Woo-taik of the opposition Liberty Korea Party and Rep. Kim Dong-cheol of the People’s Party talked throughout Monday to find a breakthrough in the deadlocked negotiation on the first full-year budget bill of the Moon administration. The agreement came two days after the statutory deadline set for Saturday, as the lawmakers wrangled over some contentious programs that Moon was pushing forward.

One of the sticking points was a plan to increase the number of public servants to create stable jobs. Moon has promised to hire 174,000 new civil servants by 2022 and proposed to hire 120,000 next year. The ruling and opposition parties agreed Monday to allow the government to hire 9,475. The agreement also made clear that the Liberty Korea Party, the largest opposition party, deferred its decision on the compromise.

Another contentious point was Moon’s plan to earmark a “job stability” fund of 2.97 trillion won for next year’s minimum wage hike, and the three parties agreed to allow the program with some strings attached.

“After 2019, the program will be funded with a budget no larger than that of 2018,” the agreement said. “The government will have to inform the National Assembly in July 2018 about its plan on how to transform the current cash subsistence program to indirect programs.”

Revision plans for the corporate tax and income tax laws are also a sticking point. The three parties agreed to back the government plan to change the income tax rate for top-earning individuals with more than 500 million won in income to 42 percent from the current 40 percent.

The Liberty Korea Party again noted in the agreement that it did not support the change. It has argued that the tax rate hikes should be introduced starting 2019, not next year.

According to the agreement, households with a child up to five years old will receive a monthly subsidy of 100,000 won starting from September. Families in the top 10 percent by income are not eligible. Starting September, the basic elderly subsidy will be increased to 250,000 won per month. The government will use nearly 2.6 trillion won of its budget to support local education offices for Nuri childcare and education programs for children aged 3 to 5 years old.