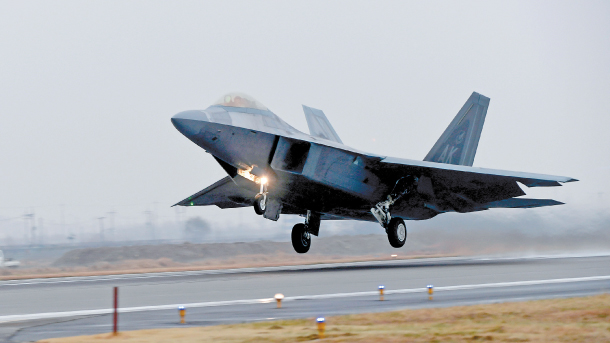 An F-22 Raptor stealth jet takes off from a Korean Air Force base in Gwangju on Monday. About 230 warplanes, including six F-22 Raptors and six F-35As, and around 12,000 personnel will take part in the five-day Vigilant Ace. [YONHAP]

The five-day Vigilant Ace (air combat exercise) comes less than a week after the North fired a new intercontinental ballistic missile (ICBM) and declared the completion of its “nuclear force.”

The annual training has drawn keen media attention, although it was scheduled before the provocation.

It’s known as the largest-ever combined air force drill between the allies, involving more than 230 warplanes and around 12,000 personnel.

They include six F-22 Raptors and six F-35As, which have been deployed temporarily to Korea for the practice.

It marks the first time that six Raptors, not just a few, have joined an exercise simultaneously in Korea. A dozen F-35Bs operated by the U.S. Marine Corps will take part in the training, flying from their base in Japan.

The allies will conduct the drills under various wartime scenarios, including simulated precision strikes on mock North Korean nuclear and missile targets, it added.

The U.S. Seventh Air Force said, “The realistic air combat exercise is designed to enhance interoperability between U.S. and Republic of Korea forces, and increase the combat effectiveness of both nations.”

A spokesman at North Korea’s Foreign Ministry on Saturday denounced the exercise as a large-scale nuclear war drill against North Korea.

“The air force drill is an annual joint military exercise among the allies of a defensive nature. The government will not comment on every reaction by North Korea,” Baik Tae-hyun, spokesman at the Ministry of Unification, said at a press briefing.