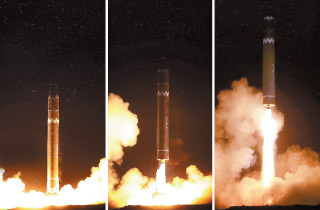 North Korea said at the last minute it wouldn’t send a delegate. The sponsors received the notice ahead of the Nov. 29 test of North Korea’s newest intercontinental ballistic missile (ICBM), which experts agree would put the entire U.S. mainland, including Washington D.C., in its range. Yun also canceled his trip. The secret tripartite meeting among Seoul, Pyongyang and Washington officials arranged by President Moon and the NIS fell through. If the meeting had been held as planned, the North Korea nuclear crisis could have turned in an entirely different direction.

Pyongyang could not send a representative while it was readying to blast off a Hwasong-15 missile. Its absence — and the test of its longest range missile — suggest it won’t be coming to any negotiating table, at least for now. Washington won’t be up for dialogue when Pyongyang threatens it with a missile that can fly 13,000 kilometers (8,078 miles) and hit the White House. The latest missile test acted as a game-changer.

While the “strategic patience” policy on North Korea from the Barack Obama administration was sneeringly nicknamed “no action,” the policy of the Donald Trump administration — trotting out one round of sanctions after another every time North Korea carries out a nuclear weapon or missile test — is being described as “reaction.” Seoul maintains Obama’s approach. In short, North Korea is all “action,” the United States “reaction,” and South Korea “no action.”

In a phone conversation with Trump after the missile test, Moon refused to define the missile as an ICBM on the grounds that its capability to re-enter the atmosphere after a flight and precisely hit a target with a nuclear warhead has not been verified. Many in Washington were baffled by his logic. It is like watching a burglar sneaking into our garden and saying, “Let’s wait and see until he breaks into the house,” a White House correspondent said.

I talked to Bruce Blair, a Princeton University professor who served in the U.S. Air Force as an ICBM launch control officer. He said there is no dispute. Pyongyang has either mastered the re-entry and final stage technology for ICBMs or will do so sooner or later. Our naivety and inaction in the past only encouraged further provocations from North Korea. At the same time, the Moon administration’s apathetic attitude has weakened the alliance with Washington, an end result Pyongyang has long been after.

Worse, there are rumors that Secretary of State Rex Tillerson and Secretary of Defense James Mattis, both of whom have helped contain Trump’s fiery actions on the security front, may be replaced. Trump denied speculation about his firing Tillerson. Mattis reportedly has warned that if Tillerson leaves, he also leaves. Without Tillerson, Mattis will be the only figure in the White House arguing for a diplomatic solution to the North Korean crisis. If Mattis really leaves, Trump may be free to do whatever he wants to teach North Korean a lesson. We must prevent such a catastrophe.

There is some hope that North Korean leader Kim Jong-un might announce a moratorium on his nuclear and missile programs in a New Year’s address. Such a watershed may not be possible if Tillerson does not command the diplomatic front. Seoul and Washington inevitably have to dance to the tune of the unpredictable leader in Pyongyang. Does our leadership have an action plan for 2018 that can change this unbalanced and dangerous playing field?