Learning history from a Korean fashion pioneer : For designer Jin Teok, it all started with a white shirt

Learning history from a Korean fashion pioneer : For designer Jin Teok, it all started with a white shirt 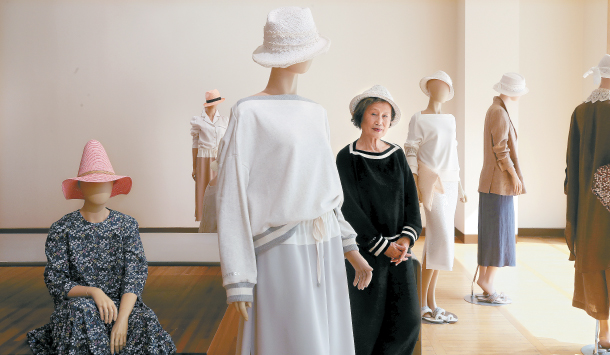 Designer Jin Teok stands among her designs at her shop in Cheongdam-dong, southern Seoul. Jin is considered a living legend in the Korean fashion industry. [WOO SANG-JO]

Currently on display at the Asian Art Museum in San Francisco is the “Couture Korea” exhibition, which will be held through February. The exhibition features works from various Korean fashion designers who have been influenced by Korean traditional apparel. Among them are designer Jin Teok’s embroidered top adorned with Shin Saimdang’s (1504-51) “Grass and Insect Paintings” and a denim dress and robe-like vest made in the style of traditional hanbok (Korean traditional dress).

Starting with her very first womenswear brand Francoise in 1965, Jin has been a part of the Korean fashion industry for 52 years now. She designed the uniforms worn by athletes at the opening and closing ceremonies of the 1988 Seoul Olympics, and founded the Seoul Fashion Artist Association in 1990, for which she served as the chairman for the first five years. Having made her foreign debut in 1993 with her first Paris collection, Jin took the honor of being the only Korean named as one of the “Top 500 World Fashion Icons” selected by U.K. publishing company Phaidon.

At 83 years old, with 52 years of experience, Jin still wakes up everyday with the goal of creating something new and wonderful. The JoongAng Ilbo, an affiliate of the Korea JoongAng Daily, interviewed the designer to learn more about her career and her life in fashion. The following are edited excerpts from the interview.

Above, a denim dress and red vest inspired by hanbok (traditional Korean dress) and a white shirt, below, designed by Jin Teok. [ARUMJIGI, JIN TEOK]

Q. You were born in the South Hamgyong province in North Korea. When did you come to South Korea, and what was it like at first?

A. The whole family came to Seoul in 1948, when I was 14 years old. When I was attending middle school in Seoul, the 6.25 War [the Korean War, which began on June 25, 1950] broke out, and we had to move to Jeju during the 1.4 retreat [the mass evacuation of civilians during January of 1951 after the North Korean army broke through the defense line]. So everything was really different for me, since I started out in Hamgyong and ended up in Jeju. It was the same Korean, but I just couldn’t communicate. I once tried to trade a gold ring for cash, but gave up because I couldn’t understand what they were saying.

You’re well known for your signature white shirts. What was it about those shirts that got to you?

One day while I was growing up, I saw my older brother’s white shirts hanging in front of the window. And when the light went through the shirt, it was just so beautiful. I wouldn’t be exaggerating if I said that the lingering image of what I saw that day has held me steady as a designer. When the light penetrated through the cotton, it made the very fibers pure and visible, and it was more breathtaking than any silk in the world. From then on, cotton became an inseparable part of “Jin Teok’s clothes.”

What do white shirts mean to you?

White shirts are me, Jin Teok, and they’re the part of my design that’s kept me strong through all these years. There’s an interesting nuance to a shirt. If a woman wears a bigger size men’s shirt, pulls it back a little and reveals the neckline, then it’s very sexy. Shirts, I believe, are the convergence of masculinity and femininity, and the mix is the sexiest part - it’s also the reason I can’t give up on white shirts.

How did you get close to the designer Nora Noh?

I failed my college entrance exams, and while I was wandering in despair, I came across her studio near Gwang Bridge in central Seoul. She was standing there with doll-like eyelashes, red fingernails and a long tobacco pipe between her fingers, like Audrey Hepburn from “Breakfast at Tiffany’s.” When I went in and asked her why her studio was called “Nora Noh,” she told me the story of Nora, the main character from [Henrik] Ibsen’s play, “A Doll’s House,” and her journey to becoming a designer. That’s when I first began to admire the life of a fashion designer.

Is that why you joined a fashion academy after you got married?

It was partly because I wanted to escape the hard life I was living while being forced to live in my mother-in-law’s house. I enrolled in an academy without my parents-in-law knowing, and they soon figured it out because I had to run the sewing machine every night. But when I finally said to them, “I have to study fashion, I think I have the skills,” they let me do it.

Why did you call your first shop “Francoise?”

I wanted to have a fancy name, so I asked my friend’s husband, who had worked as a diplomat in France, to come up with a French name (laughs). Thanks to the name, I had a lot of fancy customers, too.

You were praised very highly by fashion journalist Suzy Menkes after your first Paris collection. What was that like?

After my show finished, this person came backstage and asked to shake my hand. She introduced herself as the International Herald Tribune’s fashion editor Suzy Menkes, and said, “I waited five minutes just to shake your hand.” When I woke up the next morning and went to the front desk, I saw a newspaper featuring clothes that looked exactly like mine. I was shocked that someone had copied me and used the same materials, but below the photo it read “Jin Teok.” I burst into tears. My name was put among global designers, and it felt so fulfilling.

What do you think about the fact that you were included as one of the “Top 500 World Fashion Icons” in a book by U.K. publishing company Phaidon?

To be honest, the reason I took part in the Paris collection in the ’90s wasn’t to achieve a big goal. I just wanted to prove that we also have this kind of fashion and this vibe in Korea. Whether it was a 30 [out of 100], or 50, we would be able to know where we stood and then start from there. But being named one of the top 500 people in fashion allowed me to take relief that I had done what I had to do.

How was the Seoul Fashion Artist Association (SFAA) founded?

Me and the other designers came together to start our very own Paris collection, but we didn’t have samples to study. It’s also the case now, but the famous fashion shows in other countries only allow those with an invitation - like journalists or buyers - to enter, and we were denied. Then, we heard that Japanese brand Issey Miyake was giving out tickets to their show to their VIP customers. So, we headed to Japan and bought their clothes. We bought something like 6 million won ($5520) worth of clothes. And so, we got ourselves a ticket, but there were seven of us who were a part of founding the SFAA (Park Youn-soo, Han Hye-ja, Sul Yun-hyoung, Park Hang-chi, Oh Eun-hwan and Rubina).

So there were seven of you, and just one ticket. What did you do?

I went in on my own, put the ticket in my bag and threw it outside. We did that six times and all seven of us got inside.

The show, to put it simply, was a culture shock to us. We walked outside to a park after the show was over, and we were all speechless with our heads down. We felt so pathetic and some of us even started crying. But we still pulled through, telling ourselves that we can do it. That’s how the SFAA began: with no money and with no experience. Korean fashion has come so far, even though we started so recklessly.

What kind of style do you go for when you’re designing?

I think the inspiration for a design comes from the DNA of a culture and emotions that we already have. That’s why a designer’s radar is always on. We absorb and feel everything, and eventually, the things that have accumulated inside of me explode.

Do you think it’s necessary to have an obvious Korean touch to your designs when you’re trying to go global?

Not necessarily, no. Just as children resemble their parents, it’s all in our DNA. Our culture and tradition, the emotions and art are all embedded within our DNA. All we have to do is just remember that DNA, and we can use Korean design even when we’re making a simple T-shirt.

You look very young for someone over 80. How do you keep so young?

I go swimming every day, and stretch often. And aside from keeping myself in shape, I think it’s my passion for clothes and design that keeps me young and healthy.

What is your dream as a fashion designer?

I want to design well. I want to make things that customers feel are worth keeping.

Do you have any advice for younger designers?

It just comes down to doing your best. If you absorb all the culture that we have and mix it with the knowledge of today, then you’ll get your unique idea and right sense of these times.

Do you have any rules that you live by?

Honesty. If there’s a speck of guilt in what I’m doing, then it is wrong.

What do you have to say to young people these days?

I think the young people these days are very greedy. And quite a lot of their greed doesn’t match their reality. If they let go of that greed, then they can live their lives happily. Success cannot be measured in numbers. I hope they obtain the wisdom to feel happy with the little things.

A banner for “Couture Korea” hangs outside the Asian Art Museum in San Francisco, left. At right, a visitor looks at works designed by designer Jin Teok. [JOONGANG SUNDAY]

Open until Feb. 4 at the Asian Art Museum in San Francisco is the “Couture Korea” exhibition, highlighting the history of hanbok, or traditional Korean dress. Co-organized by the Asian Art Museum and the Arumjigi Culture Keepers Foundation and sponsored by the Korea Foundation, the exhibit opened on Nov. 1 and is the first-ever hanbok exhibition held at a major museum in the United States.

Throughout the exhibition are some 120 pieces that have been carefully selected over the course of three years by both the museum and the Arumjigi Foundation and flown across the Pacific. The exhibition features works from reinterpretations of the clothing worn by the royal family in the Joseon Dynasty (1392-1910), to modern hanbok-style dresses created by some of the most talented contemporary Korean designers such as Jin Teok, Im Seonoc and Jung Mi-sun.

“K-fashion has the potential to overthrow K-pop or K-drama [in popularity],” said Jay Xu, the director of the museum. “Korean fashion takes the simple act of dressing to a new level. Their designs, built upon a truly rich heritage as this exhibition demonstrates, can be appreciated by an international audience.”

In the museum’s Korean art galleries are art pieces owned by the museum, such as portraits, accessories and bojagi [traditional wrapping cloths], which help visitors get a better grasp of the traditions of Korea.