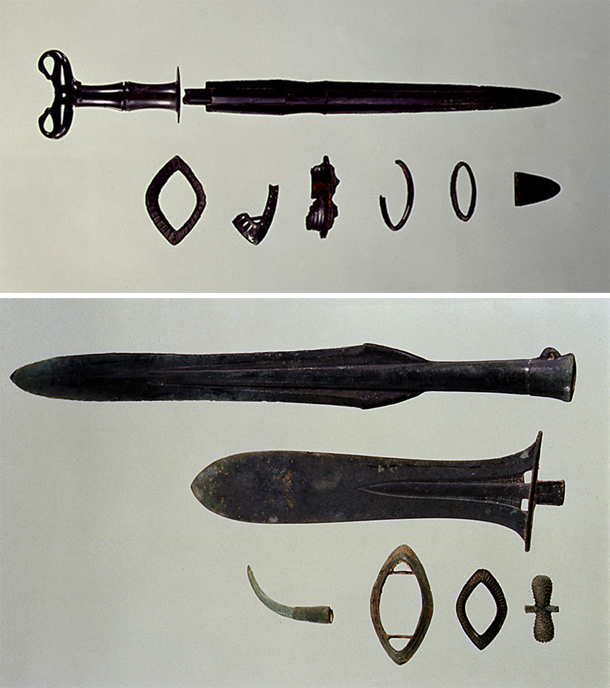 These relics were found in a tomb in Bisan-dong, Daegu, dating back to the early Iron Age.

The sword, top right, is a slender bronze dagger commonly found on the Korean Peninsula, and its tip is sharp. It has a node in the body, and the end of the handle is inscribed with a pair of water birds looking at each other.

Swords with these designs have also been unearthed near Pyongyang.

The sword end accessories are shaped like gingko fruits inscribed with repeated parallel lines on the surface. The sheath ancillary parts are oval-shaped bronze rings.

The sword end accessories are attached to the end of the wooden sheath.

The sword is presumed to have been made in a southern region of the Korean Peninsula, judging from the fact that the handle and the sword tip accessories are separated from the sword.

Meanwhile, the spearhead that is National Treasure No. 137-2, bottom right, was used by inserting a wooden handle into its end and fixing it to the semi-circle ring at the end of the spearhead. This is one of the longest socketed spearheads ever found on the Korean Peninsula.

Another one that was found has no hole in the ring attached to it, leading researchers to believe that it was used only for ceremonial purposes.

The third one is in good condition. Many of the socketed spearheads found on the Korean Peninsula were made in imitation of those made in China, but these are completely localized ones.