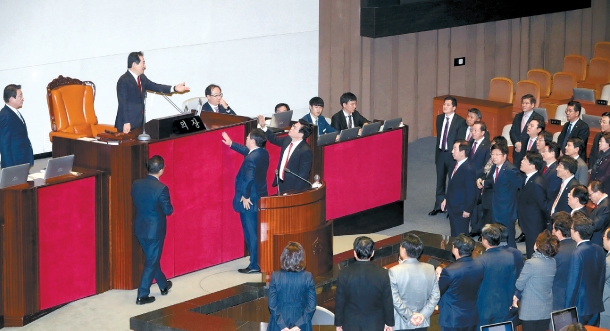 Liberty Korea Party lawmakers gather at the podium of National Assembly Speaker Chung Sye-kyun in Yeouido, western Seoul, on Tuesday, objecting to a vote on next year’s budget. The budget passed 30 minutes after midnight with the party boycotting. [KANG JUNG-HYUN]

Four days after missing the Dec. 2 deadline, the National Assembly on Wednesday passed next year’s budget 30 minutes after midnight.

It is 4.6 percent more than this year if the 10 trillion won supplementary budget approved by lawmakers earlier this year is factored in.

However, the budget was trimmed by 137.5 billion won from the initial proposal made by the Moon Jae-in government, which was 428.9 trillion won.

Some 1.5 trillion won was slashed from the welfare and labor budget, which still accounts for the biggest portion of the budget at 144.7 trillion won.

One of the main victims was the childcare allowance. The government initially planned to give monthly payments of 100,000 won to all families with children under the age of six starting next July. That would have cost 1.1 trillion won.

But the three major parties - the Democratic Party, Liberty Korea Party and the People’s Party - decided to postpone the program to September and exclude households in the top 10 percent in terms of incomes, which resulted in the cutting of the budget to 701 billion won.

Also a raise in allowances that was initially planned to be implemented next April was delayed to September, which also cut its budget in half. The government was planning to give monthly payments of 250,000 won to people over the age of 64 in the bottom 70 percent in terms of incomes. That represents a 50,000 won increase in the current monthly allowances.

But the budget for social overhead capital (SOC) or infrastructure development was raised 1.3 trillion won to a total of 19 trillion won.

The infrastructure budget included an increase of 13.4 billion won compared to the government’s initial proposal for the construction of a KTX line connecting Gwangju and Mokpo as well as an additional 20 billion won to build an expressway in Gwangju.

The Moon government was hoping to significantly cut SOC projects to distinguish itself from conservative governments over the past 10 years.

“The government’s foremost priority is creating jobs,” Finance Minister Kim said. “There has been favorable news such as economic growth this year reaching over 3 percent and rises in exports. But jobs remain a problem that is not easy to solve.”

Another area that saw a noticeable increase was R&D spending of 19.7 trillion won, a 200 billion won or 1.1 percent increase.

Compared to the initial government proposal, that’s a 30 billion won or 0.2 percent increase.

The final budget included 4.2 billion won for research in block chain technologies and a 1.6 billion won increase in research on wearable smart device to a total of nearly 6.7 billion won.

But research on next generation information and computing technologies saw a drop of 1.56 billion won from the initial government proposal of 15.6 billion won.

Under the new budget, the government’s debt-to-GDP ratio is expected to be lowered 0.1 percentage points to 39.5 percent from the initial government proposal, which would have brought it to 39.6 percent.

Under the initial government plan, the national debt for next year was estimated at 708.9 trillion won and now it is expected to be 700 billion won less or 708.2 trillion won.

The passing of the bill wasn’t easy. The main opposition party, the Liberty Korea Party boycotted the vote to protest an increase in civil service hires and a raise in the corporate tax rate.

On Tuesday, the conservative party requested the vote on the budget be delayed, which was ignored.

The vote went on with only 178 lawmakers out of 298 casting votes. Some 160 voted in favor of the budget while 15 opposed and three abstained.

The Liberty Korea Party protested what it called a back-door deal between the ruling Democratic Party and the People’s Party.