Shin Jun, the 41-year-old CEO of Care You, never expected that he would be running a “silver start-up.” But an experience he had while living abroad in the United States changed all of that. After graduating college, Shin spent a little over a year working at a nursing home in the United States, where he was impressed to find out how much the caregivers cared not only about health, but also about the hobbies and pastimes of the elderly residents.

The experience left such a lasting impression on him that while pondering upon his time, he came up with an idea to develop programs that improve the quality of life for senior citizens in Korea while working as a teacher at Korea Game Science High School in North Jeolla. After completing his Social Entrepreneurship MBA (Semba) at the Korea Advanced Institute of Science and Technology (Kaist), he developed his idea into an enterprise, which is how Care You came to be.

Shin was not the only one who was thinking about start-ups that will benefit the lives of seniors. These “silver start-ups” are spreading fast, and Shin’s company is a part of a quickly growing trend. 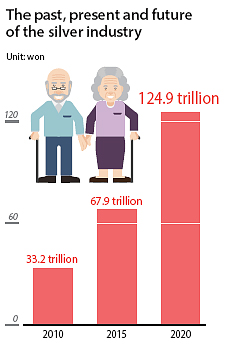 Korea’s population over 65 is 13.8 percent according to data from this year, and projections show that number will exceed 14 percent in 2018. By 2026, it is predicted that seniors will take up more than 20 percent of the entire population.

Although prospects for what is known as the “silver market” look promising, new services or products aimed at the elderly are still limited in the market, which is why silver start-ups, which look ahead to a super-aged society, are gaining attention today.

Care You, established in 2014, is a preliminary social enterprise which makes “silver content” using a combination of information technology (IT) and smart devices. The company’s top products are apps such as EnBrain and Mental Health Test. By playing the games for five minutes, elderly can prevent the onset of Alzheimer’s disease. The apps can easily be downloaded through the smartphones or PCs.

Although it started with a mission of preventing and diagnosing Alzheimer’s in its users, Care You plans to expand into other services. The enterprise recently launched its own smartphone education classes for the elderly. The teachers of the classes are delinquent teenagers. By empowering the students to be teachers, the kids and seniors can help each other.

The company has begun building a center for the elderly. A senior social welfare center in Anyang, Gyeonggi, requested Care You to establish a “Smart Healing Center.” The center will be filled with digital services for seniors to pass their times. Care You has also started researching ways to implement robots into its service for diagnosing and treating Alzheimer’s disease.

“Although businesses related to senior life are still in their infancy when it comes to receiving government subsidies or services provided through medical care expenses, they will expand their domains to training educators and developing robot services, along with increasing their profit models.” Shin said.

In Busan, a start-up named ROHA has created a smartphone voice platform for active communication that is accessible for the senior population. Kim Kyung-moon, ROHA CEO noted that, “Although senior citizens use smartphones, it’s rare for them to enjoy social content or social media like young people do these days, and since we are also aware of how they struggle to adapt to smartphone keyboards, we have established a voice platform to resolve that problem.” Currently, only the instant voice messenger service is available, but Kim is planning to expand the service into a social media platform based on voice. The platform will be a place for seniors to connect and share their hobbies and interact with others after retirement.

When Kim started his business in 2014, he was immediately drawn to creating products for senior citizens. The first product he came up with was a service that allows people to manage their own digital legacy. For people who were facing death, he sorted out their digital records and gathered pictures, videos and writings of the deceased and passed on the collection to their families.

“My father passed away when I was five,” Kim said. “But I’ve always wondered what he would have wanted to leave me with and that’s when I thought of this service.”

Business went well. The service attracted 400 million won ($367,884) in investments from venture funds and was introduced as a successful start-up enterprise by various institutions. The demands were quite high too. Encountering people facing death every day took a toll on Kim. In the end, Kim changed the direction of his business to create a platform for seniors to enjoy their free time.

These days, he is focused on growing his business to develop a voice interaction speaker for seniors living alone, to decrease their loneliness. The speaker will be able to have conversations with its owners and keep them company.

“I think the reason why young entrepreneurs are shying away from creating products for the elderly is because there are limited opportunities for them to deeply observe the discomforts of senior life,” he said. “However, seniors have a tendency to invest their money and time once they settle down with the services. So we can easily earn profit and also make a contribution to society.”

Korea Health Industry Development Institute predicts that the scale of silver-friendly industries will grow to a maximum of 124 trillion won, which is nearly four times larger than 2010, which is about 33 trillion won.

However, the rise of employment of seniors is far behind the increase of the over-65 population. According to research published by the National Statistical Office titled, “Supplementary Results of the Economically Active Population Survey for the Old Population in May 2017,” the population of those aged between 55 and 79 is 12,916,000, a 4.2 percent (519,000) increase from the May 2016, while the economic activity participation rate is 56.2 percent, and employment rate is 54.8 percent (7,084,000) only inching up by 1.1 percent compared to last year. 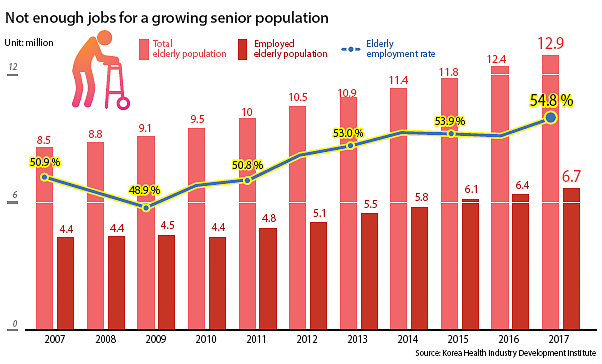 Creating jobs for the elderly

Mary Table is another silver start-up, but its mission is different from the others. The company’s products have not been created for the convenience of the elderly, but instead are a service provided by senior citizens. Established by Yang Soon-mo, Mary Table’s main service is Hobbyful, which distributes online hobby lectures and related DIY kits.

Without any time or space constraints, people can enjoy their hobbies using the tool kits that they ordered, while following the professional artist’s instructions through online lectures. Since the end of May, the service has sold more than 5,000 classes and in October alone, the service made 50 million won in sales, three times more than it made in its first month.

The reason Hobbyful is classified as a silver start-up is because all the processes of assembly, production and packaging of the DIY kits are done by the hands of senior citizens. Yang started the business with the purpose of resolving the senior employment problems while creating profit.

“I started the business trying to think of a start-up that could provide more jobs for seniors, instead of the other way around,” Yang said. “I thought the kits could be easily produced by them and I thought there was a definite opportunity for profit.”

Before Yang started the start-up he had a chance to take a closer look at senior living in poorer parts of the country, which is how he became interested in providing employment for the elders. After graduating from college, he managed an online flower shop for two years with people living in secluded areas, which gave him the idea of starting a company that would provide employment for elders in need.

“I only started all of this with a vague idea, but through meeting wonderful professors and colleagues, I broadened my perspective and realized my vision and plans with their support,” he continued.

“Currently only six seniors have been hired indirectly to participate in making the kits, but I plan to hire more senior workers and secure their employment once the business grows and profit increases.”