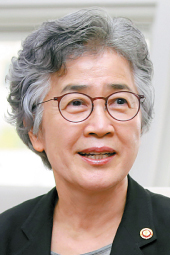 The nation’s transparency watchdog will move forward with a stronger anticorruption policy to support the Moon Jae-in administration’s campaign against “accumulated evils” and use an inter-ministerial network to eradicate irregularities from public service, Pak Un-jong, chairwoman of the Anti-Corruption and Civil Rights Commission (ACRC), said in a recent interview.

Pak, a law professor at Seoul National University, was appointed to head the ACRC in June, shortly after Moon took office. She was elected Monday as a regional director of the International Ombudsman Institute, a global organization participated in by 195 ombudsman institutions from 116 countries. She will serve the post as an Asia director and a board member until 2020.

In an email interview with the Korea JoongAng Daily, Pak emphasized her determination to support Moon’s campaign to remove “accumulated evils” from Korean society.

“The presidential scandal [of Park Geun-hye] and subsequent impeachment and criminal trials allowed the people to realize that corruption in our society is more serious than ever,” Pak said. “High-level officials with power and responsibility bypassed legal and administrative systems and abused their power, so the disappointment was particularly deep.”

The public, therefore, has a strong desire for new administration to create an uncompromising anticorruption policy, Pak said, noting that 30 percent of voters in the exit polls during the May 9 presidential election said they supported Moon for his pledge against corruption. About 12 percent of the 180,000 public petitions collected shortly after Moon’s inauguration were also anticorruption demands, she said.

“We want to assure the public that not only the ACRC, but also other government offices are working hard to meet people’s expectations,” she said, adding that the consultative committee on anticorruption policy, hosted by Moon and participated in by ACRC and other government offices, will act speedily to implement anticorruption and reform projects.

The ACRC also hosted an important international conference in Seoul to share Korea’s campaign with other countries, Pak said.

“Because development levels of the countries in the Asia-Pacific region are widely vary, the Asia Development Bank [ADB] and the Organization for Economic Co-operation and Development [OECD] jointly established the ADB/OECD Anti-Corruption Initiative for Asia and the Pacific to help their economic and global advancements,” she said. The initiative, established in 1999, has 31 member states.

Pak said the 9th conference of the initiative was held in Seoul from Nov. 15 to 17 and anticorruption policies and experiences by member countries were shared through the event. “Priority tasks for the private and public sectors to fight corruptions and other measures including transparency education for the youth were discussed,” she said.

She also said there was a lot of attention being paid to positive changes Korea was experiencing after it introduced a new antigraft act. The so-called Kim Young-ran law was introduced in September 2016, and plans to further develop its application were presented at the conference. “It was a great opportunity to express our government’s strong will to fight corruption to the international community,” she said.

According to Pak, the law has secured strong support from the public, although it was only implemented for little over a year. Many positive changes were witnessed, Pak said, noting the satisfaction of parents of students and entrepreneurs.

While Pak is a strong defender of the law, the Moon administration attempted last month to raise the spending limits on meals and presidents. The move, however, was blocked by the commission, as it voted down an amendment on Nov. 27.

Pak, one of the 15-member decision-making panel, did not attend the voting, because she was attending another meeting at the National Assembly. She later told the legislature that the commission will hold another vote on Dec. 11 to accommodate the government’s plan. “Taking into account the people’s strong support for this law, we want to minimize the adjustments in the ceiling limits,” she told the lawmakers on Friday.

Promising a key role in the Moon administration’s anticorruption campaign, Pak told the Korea JoongAng Daily that a more comprehensive policy to improve transparency of the government and civil servants will be created during the first half of next year. She said more specific regulations will be created in order to prevent conflicts of interest in the public service and more protection will be provided to whistle-blowers.

Pak also said the ARCR is operating a special tip line until the end of this year to follow up with Moon’s order to eradicate irregularities in the hiring processes of public companies.