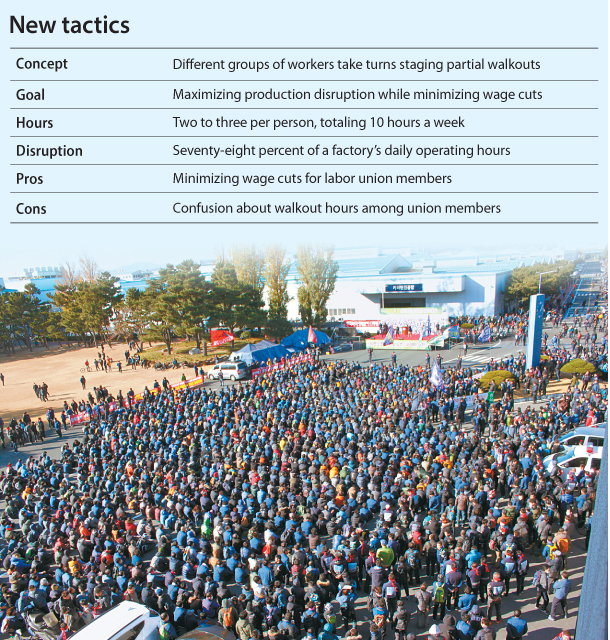 Hyundai Motor workers stage a partial walkout at the company’s plant in Ulsan on Tuesday. [YONHAP]

Hyundai Motor’s labor union has generally stuck to the same tactics in its annual wage strikes, but this year, they’ve started adopting new methods to maximize damage to the company.

“The well-ordered full walkouts we have been staging for the past 30 years haven’t been able to deliver serious damage to the company,” a union spokesman said Wednesday. “We will initiate a new walkout method to minimize wage loss to the union but maximize damage to the company.”

Until now, the union has either been staging full strikes, where all of its members boycott work for a certain number of hours, or partial strikes, where the union divides members into groups that take turns walking out for a few hours each day.

This year, the union had a smaller number of groups and staggered their walkouts to increase the number of hours that each person worked, but in a manner that effectively halted production for the day.

When their boycotts ended, another team, this time from outside the assembly line, joined the strike from 2:50 p.m. to 4:50 p.m. Between 3 p.m. and 5 p.m., office workers who are also part of the union walked away from their desks. Three hours after that, the night workers began their walkout.

Each individual only lost two hours of pay per day, but production was suspended for nearly the entire day because the assembly line was unable to operate without the help of various teams. The absence of just one team threw the process into chaos.

The union’s walkout on Thursday was even bolder. The backup team that makes engines and transmissions staged their own walkout for three hours, but the manufacturing team that works directly on the car assembly line stayed in place.

The backup teams look over facility operations and manufacture certain parts separately. Their presence in the factory is needed to manufacture a complete car. Not a single vehicle was produced on Thursday because of the engine team’s absence. Their walkout would also harm production the next day because there would not be enough parts in stock.

This walkout strategy is meant to maximize the number of hours that each individual works while harming the company’s bottom line. It is a product of hard lessons that the union learned from past strikes. Last year, workers staged their longest-ever walkout of 24 days and suffered heavy wage losses from it.

This year, the union is determined to avoid the same fate, but it remains uncertain whether the company will factor production losses into workers’ pay. The union argues wages should not be affected. “When production halts due to a supply shortage like engines and other parts, the liability goes to the company according to civil law,” a union spokesman said.

Hyundai Motor argues differently. “Even if the assembly line stops because there are no engine parts, their payment should be affected because the supply shortage came from the strike,” a company spokesman said.

Union members have been staging walkouts on weekdays while working weekends to maximize pay. Wages paid for weekend and holiday work are 150 percent of weekday wages. The tactic is a turnaround from past strategies in which labor unions would refuse to work on weekends first before walking out on weekdays.

“Staging a strike on weekdays and coming to work on weekends is the labor union’s sly attempt to be compensated for the wage loss from the weekday walkouts,” the Hyundai spokesman said.

The union plans to continue its staggered walkouts until next Friday.