Seoul reaches out to east Russia

Seoul reaches out to east Russia 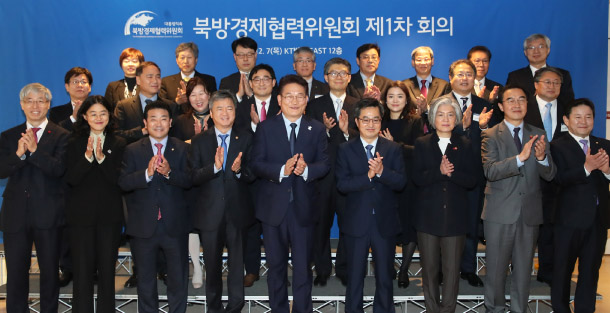 Seoul will strengthen ties with Russia in nine areas, including energy and transportation, according to a presidential committee that launched its inaugural meeting on Thursday, in line with the president’s vision to expand economic cooperation with northern states.

The Presidential Committee on Northern Economic Cooperation discussed how to implement the New Northern Policy, President Moon Jae-in’s plan to improve economic cooperation with the Russian Far East, Northeast Asia and Eurasia, which he presented at the Eastern Economic Forum in Vladivostok in September. Eventually, Pyongyang may be included, contributing to peace and stability on the Korean Peninsula.

The committee was launched at the KT Building in Gwanghwamun, central Seoul, with participants including the committee’s chairman, Song Young-gil, former mayor of Incheon, as well as Finance Minister Kim Dong-yeon, Foreign Minister Kang Kyung-wha, Unification Minister Cho Myoung-gyon and other key officials from government agencies, as well as civilian experts.

The first country the committee chose to focus on was Russia. Participants discussed how to boost exchanges between Korea and Russia through nine key areas, or the “nine-bridge” strategy, which include natural gases, railroads, ports, electricity, Arctic shipping routes, shipbuilding, labor, agriculture and fisheries.

Other countries under the New Northern Policy include other Commonwealth of Independent States members and associates, such as Belarus, Ukraine and the five Central Asian countries, including Kazakhstan, Uzbekistan and Turkmenistan. Also included are Mongolia and China, especially its northeastern provinces.

The committee is expected to draw up a road map by April. It may sign a memorandum of understanding on the development of Russia’s Far East by early next year, and bolster ties with other countries, including Mongolia.

“The president has always had a strong vision of economic cooperation with northern states, and expressed this after his inauguration, agreeing with [Russian] President [Vladimir] Putin on many principles and visions at the Eastern Economic Forum,” the committee’s chairman Song, said at the inaugural meeting. “The New Northern Policy will enable Korea to find a new growth engine and at the same time, economic cooperation with northern states can play a significant role in reducing military tensions in Northeast Asia and enabling co-prosperity.”

Some 200 representatives from 153 companies, such as Hyundai Engineering and Construction, Samsung Electronics, SK Telecom, KT and Korea Electric Power Corporation (Kepco) took part in the launch of a Korea-Russia business consultative body, hosted by the Korea Chamber of Commerce and Industry, Korea Trade-Investment Promotion Agency and the Presidential Committee on Northern Economic Cooperation. It is expected to play a role in expanding trade and investment cooperation with Russia, according to the Ministry of Foreign Affairs.