Left: Seoul Mayor Park Won-soon addresses ambassadors, diplomats and their families from nearly 30 countries at the Public Diplomacy Night hosted by the Korea JoongAng Daily and Korea Foundation for Advanced Studies in Seoul on Wednesday. Right: The diplomatic corps, many of whom have taken part in the Korea JoongAng Daily’s interview series with ambassadors and their spouses in order to bring their homelands closer to readers here, listen to Mayor Park’s address. [PARK SANG-MOON]

Foreign ambassadors gathered at the Korea Foundation for Advanced Studies in Gangnam District, southern Seoul, Wednesday evening to hear from top local government officials on how public diplomacy plays out in today’s tumultuous era and to look back on the Korea JoongAng Daily’s three-year endeavor introducing foreign cultures to readers here and abroad.

Seoul Mayor Park was accompanied by his wife, Kang Nan-hee. 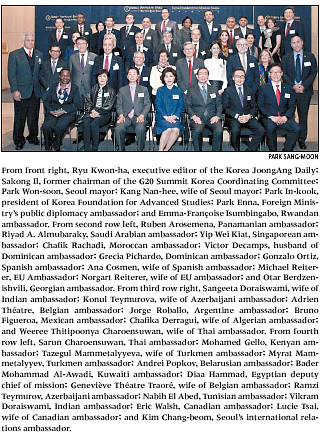 “The world that we are living in today,” said the mayor, “is witnessing an unprecedented level of urbanization .?.?. Reckless development, traffic congestion, air pollution, demographic change and economic inequality are just some of the numerous challenges that the world faces together.”

“Seoul is promoting the sharing of best practices among cities across various fields including transportation, waterworks, e-governance and more,” said Park, adding his office was sharing 53 policy solutions with 39 cities in 28 countries.

Jakarta, Indonesia; Hanoi, Vietnam; and Pasig, Philippines, were given as recent examples of foreign cities that were inspired by Seoul’s policy efforts to become a low carbon society.

Seoul provided policy consultation on transportation planning to Colombo, Sri Lanka; Bandung, Indonesia; and Da Nang, Vietnam, he said, and introduced its public transportation card system to Ulaanbaatar, Mongolia, and will soon do so to Kuala Lumpur, Malaysia, and Bangkok, Thailand.

The rest of the world has “open access” to Seoul’s policy solutions because the metropolitan government has built an online platform and provides real-time sharing services.

Park Enna, public diplomacy ambassador at the Foreign Ministry, explained that the key objective of Korea’s pursuit of public diplomacy lies in enhancing worldwide awareness that Korea is an “attractive and trustworthy country,” while capturing foreigners’ “hearts and minds.”

“Public diplomacy has been evolving in its content,” she said. The third phase of public diplomacy, or “public diplomacy 3.0,” as she called the Korean government to be in, is characterized by various public-private partnership activities that involve an extensive range of soft power assets, particularly people-to-people exchange.

The private sector will play a more significant role in the upcoming stage, she said.

President Park In-kook of the Korea Foundation for Advanced Studies explained the role of his organization in stimulating intellectual discussions on far-reaching global and regional topics in order to assist the international community to deal with various global challenges.

“We endeavor to inform and educate the public by convening academicians and renowned thinkers in the political, economic and scientific fields to disseminate new information,” he said. “For these programs, we closely collaborate with leading universities such as Harvard University and Peking University, and influential think tanks such as the Brookings Institution on trilateral and multilateral formats to promote mutual understanding and cooperation.”

Sakong Il, former chairman of the G20 Summit Korea Coordinating Committee, underscored the role of public diplomacy in today’s “rapidly changing geopolitical situation and an environment of growing nationalism, isolationism and ongoing tension on the Korean Peninsula and in the region,” adding that it is needed to “build the basis of trust for greater bilateral and multilateral cooperation.”

The Public Diplomacy Night will be held annually at the end of each year with the hopes of becoming Korea’s leading gathering for the foreign diplomatic corps to discuss the future of public diplomacy.

So far this year, 17 countries have been introduced in the Korea JoongAng Daily’s “Trading Places” series, through which ambassadors, a national from that country and a Korean who lived there shared their experiences living in both cultures.

Upon wrapping up the project early next year, the paper will return with “Capital Connections” in March. Ambassadors and their spouses will be asked to introduce a part of Seoul they’ve come to admire and introduce somewhere in their capital city.