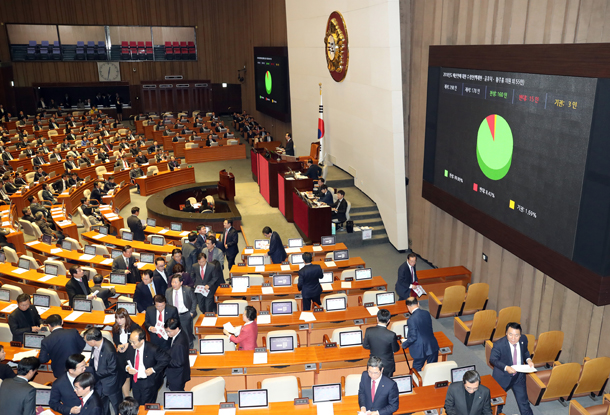 Even family budgets have philosophy. A family that wants to enjoy the day would have different spending habits than a family planning for the future. The priority of savings reflects family values and priorities, whether purchasing a home or a car, tuition or travel funds. Most households have rather simple financing decisions.

However, the budget that the National Assembly finalized was not as good as a family budget. It lacked philosophy or pride.

The government is primarily responsible. The original budget plan had a slogan, “A 2018 Budget That can Change my Life.” Can the finalized budget really change my life? Hiring more civil servants can change our lives, especially the 9,475 new hires. The government stressed that increasing public employees would lead to reinforced safety and welfare. But struggling households have to ask again. Over the past few years, as conglomerates make profits, the government became rich as well. People are trying as hard to get a jobs in the government or at public corporations as they would be to join a big corporation. Can it really change people’s lives?

I feel bitter to hear that the Vice Prime Minister of Economic Affairs facilitated the agreement between ruling and opposition parties. If proposing a middle ground is the skill, the budget doesn’t need to be thoroughly planned. I object to the agreement made midway with no reasoning or grounds.

The National Assembly is also responsible for the government. The ruling party needs to explain on the increased SOC budget that adds up to 19 trillion won ($17.5 billion).

The ruling party has been opposing unnecessary construction work. I can find no other interpretation than an attempt to win votes in the upcoming regional election. The opposite People’s Party was the negotiation partner and is shameless. It is surprising to see its position change on the increase in public employees in a few days. Casting votes should not be a synonym for lacking a backbone or changing positions easily.

I always thought that failing to meet the legally defined deadline to process the budget every year was a problem. But I changed my mind after watching how the budget plan was agreed upon. It is toxic to reach an agreement for agreement’s sake. If agreement is not possible, it is better for the opposition to clearly state the reasons in the National Assembly and put the budget up for vote. I politely reject populism in the face of governance.