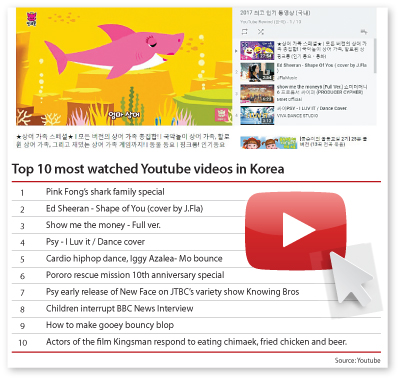 This year the most watched YouTube video in Korea was the 30-minute long Pinkfong’s children song dubbed “Shark Family Special.”

The video repeats the “Baby Shark” nursery rhyme, but in a variety of different styles including a performance by a children’s choir and a techno version.

According to SmartStudy, the company that created the video, said this was the second year in a row that the video has ranked as the most-viewed YouTube video in the country.

Interestingly, while K-pop sensation Psy’s “Gangnam Style” is no longer on the list, two covers of songs from his latest album made it into the top 10. On the separate official music video ranking, both songs by Psy - “I LUV IT” and “New Face” - made it within the top ten.

While the “Children interrupt BBC News Interview,” uploaded in March, ranked eighth on the Korean ranking, it was the only Korea-related YouTube video that made it onto the international top 10 most-watched video list.